Home  »  In The News • Marketplace Watch • Myntra  »  Myntra.com is back, with a new improved desktop website 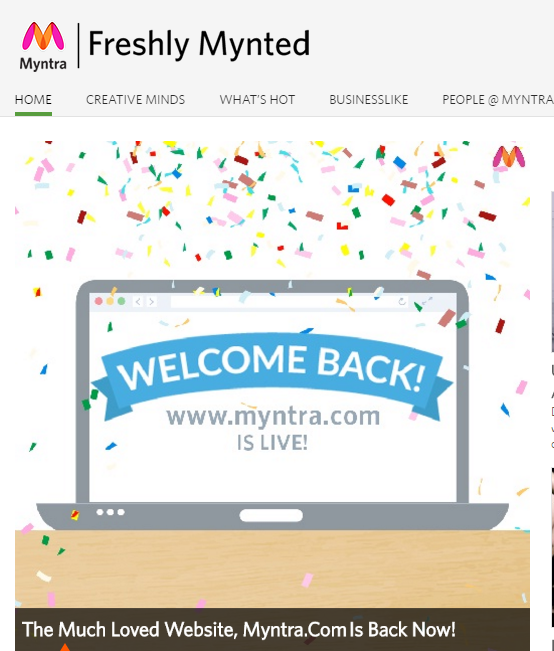 Looks like Myntra re-launched its desktop website sooner than expected. The online fashion etailer launched their desktop site on 28 May 2016 and informed consumers about the same via text message:

Myntra went app-only last May, ignoring desktop users and its less tech savvy consumers. Just a year into its app only strategy and already the etailer seems to be tired of this approach.

Whose Idea was it Again?

Last year Myntra was all for its app only strategy. They claimed their desktop site wasn’t performing as well as it used to and almost 80% of its traffic came solely through their mobile app. They also said it would cut costs. So why go back to square one?

Myntra says it was after careful consideration of its consumer’s feedback that it decided to bring back its desktop website. The company’s CEO, Ananth Narayanan, explained desktop users have not decreased over time. Also the products in their newly launched categories would be displayed better via the desktop mode.

The online fashion marketplace began to backtrack in November last year with the re-launch of its mobile website. However, it was emphasized that focus would still remain on the app.

Myntra Eating Its Own Words

“We listened to your feedback and brought the website back. We believe that customers should have maximum choice, be it in selection of clothes or the device they like to shop on. Hope that you will enjoy shopping on our revamped desktop site, mobile web and mobile app.”

Myntra’s desktop website has been built from scratch making it more responsive, according to the blog post. It works gracefully across all browsing mediums like mobile phones, tablets and of course desktop web browsers.

The images on display are optimized creating crisp visuals in both retina and normal devices. That too without adversely impacting overall performance!

Reasons for the U-turn Approach

Myntra claims it has changed its strategy based on consumer feedback but this massive u-turn might have been an impending outcome. Not everyone was happy with the app-only strategy. In fact the app had a couple of glitches that interrupted online shopping. Just a week ago the Myntra app went haywire, spamming its users with bizarre notifications. That was right after their announcement to re-launch their desktop website.

In addition to this, the etailer also expressed its expectations for a 15 – 20% increase in sales after the re-launch of its desktop website.

Other New Approaches at Myntra

Other changes introduced at Myntra include:

Bing spending and discounts may have lead to marketplace losses. But now Narayanan says. “We’ve streamlined costs in a big way. By improving our product selection, we’ve managed to cut discounts significantly.”

“The number of miles a package travels is much lower now, and we’re also using surface transport a lot more than air (thus cutting costs). We’re planning better in terms of when to increase and decrease our supply chain costs by aligning them with demand. When demand is higher we’re able to scale up by working with external logistics players and not increasing our capital costs. The number of times people come to Myntra has also increased significantly, which lowers our customer acquisition costs,” claims Narayanan.

According to Narayanan, “We’ve cut the long tail and added more big brands, and styles within big brands that have the highest sell-through rates. We’ve added top local and international brands like Louis Philippe, Forever21, and Marks & Spencer that are not available anywhere else and these brands are doing really well for us. We’re using data to figure which brands and styles have the highest sell-through rates. The number of styles (200,000) in our existing categories has stayed the same and will stay the same, but our revenue per style has gone up dramatically.”

Myntra introduced has added the categories of furniture and jewelry to its marketplace. Myntra’s CEO said, “In all these categories, we will be looking at mass premium segment where the margins are high, so it works for unit-economics.” He also added that the company is targeting sales worth Rs. 500 crores in the next two years from furniture.

Flipkart’s Tweaking Its Strategy Too!

Flipkart hasn’t seen many sunny days of late. The competition among online marketplaces is getting fierce and Flipkart seems to be losing its grip. The etailer has tweaked a thing or like its burn rate, its logistics strategy, courier services and discounting strategy during sales over the course of this year so far.

Looks like Flipkart and Myntra are both facing difficulties in staying on top, but neither wants to be defeated!