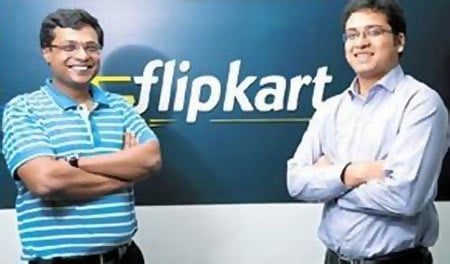 In the year 2016, Flipkart’s share value was marked down many times by its investors, with last being in December. Co-founder Binny Bansal brushed it aside as an insignificant matter. Sachin Bansal too didn’t look too concerned about the devaluations.

“The trigger (for the reshuffle)… was repeated mark-downs in its valuation by the fund units of Morgan Stanley and Fidelity.”

A year ago, Binny Bansal had replaced Sachin Bansal as Flipkart’s CEO and Sachin had admitted that he was removed from his post due to poor performance. With Krishnamurthy’s appointment, Binny met the same fate.

Tiger Global takes matters into their own hands

The new CEO has earned the tag of hard taskmaster and is pretty ruthless when it comes to getting rid of anything that’s hampering Flipkart’s growth, be it people or business units. He started focusing on big ticket items instead of draining funds in the name of growth since his entry into the company as Business Head in June.

This is a complete opposite of Amazon’s strategy for its India business, which is ‘win at all costs even if it results in heavy losses’.

Speaking about the changes implemented by Krishnamurthy, a Flipkart employee said,

Tiger ready to pounce on Amazon

Flipkart currently leads the Indian ecommerce market. But gradually the American etailer is closing the gap and might dethrone the home-grown etailer. Naturally, Flipkart investors are a worried lot these days. However, Tiger Global’s direct involvement in the company’s operations has put other investors at ease.

“Investors are happy with the way the founders have stepped aside and given the control to professionals, as it’s very rare in India,” a source affirmed.

Tiger Global wants to improve Flipkart’s performance before the IPO and next funding round. But would Krishnamurthy be able to fight Jeff Bezos’ deep pockets?