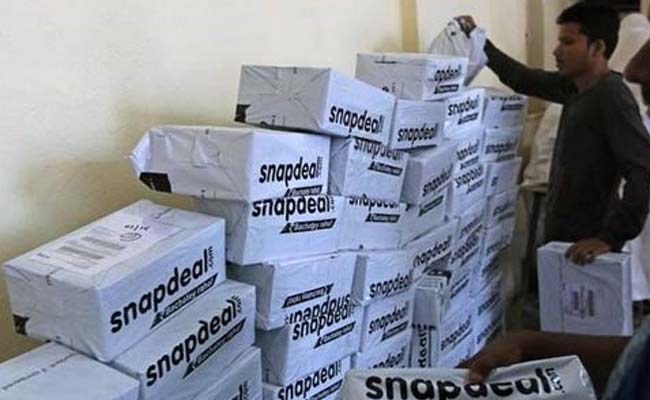 While Amazon and Flipkart constantly compete over who is sellers’ favourite and whose monthly sales were higher, Snapdeal has always been proud of its speed of delivery. In the past, the etailer has raced ahead of its rivals and fulfilled orders faster than Amazon and Flipkart. The etailer also started speedy delivery initiatives to cover 30,000 pin codes and remote towns.

That was last year. In 2017, Snapdeal’s speed of delivery has not only slowed down, but its courier partner has no interest in delivering packages.

In March, Indian Online Seller (IOS) published a story about Amazon India courier partner ATS’s fake delivery attempts. This time it is Snapdeal’s fully owned logistics arm Vulcan Express that has been accused of lying to vendors and shoppers.

Both are the online marketplaces’ own companies. One would assume that service of such logistics firms would be better compared to third party service providers. But be it ATS or Vulcan, sellers have a huge list of complaints that includes late pick-up, lying to customers about ‘attempted delivery’, manipulating delivery status and harassing sellers.

Online seller Chirag Jain informs IOS that Snapdeal’s courier partner Vulcan is not delivering goods. However, on the SD seller panel the orders are listed as ‘completed’.

“I have not got even a single order in last 10 days and those which went are bound to return as they were lying with Vulcan courier office for almost 8 days and are yet not delivered since 18th of March. It was picked up on Monday 20th march and laid in office for a complete week even though we had manifested it on 18th march. When we spoke to head of Vulcan centre, he told parcel is with them and it was not reflecting in their software,” says Chirag exasperatedly.

Chirag contacted Snapdeal’s seller support and explained that due to a technical snag at Vulcan’s end his order didn’t dispatch and wouldn’t be delivered on time. He asked Snapdeal if customer does not accept the delivery due to such delays would they charge sellers for it.

Snapdeal Seller Help Advisor’s response to Chirag’s query was, “We apologies for the inconvenience caused. We regret to inform you that if a product is courier return or customer return, return charges is to be bared by seller as per return policy. (sic)”

A frustrated Chirag requested the seller help team to escalate the issue to the top management as his parcel is still lying at the courier office even after a week and has not moved out due to technical glitches at Vulcan Courier. Unfortunately, the top management is yet to make an appearance. But Chirag has been asked to pay the return charges for an order that wasn’t dispatched due to Vulcan’s error.

Vulcan is one of the worst courier companies, says seller

The menace of delayed/fake delivery created by Vulcan has many victims. Seller Saurabh tweeted to Snapdeal complaining about the fraud committed by its logistics arm. Another seller Ahmad Hussain, from Meerut who runs Raunak Enterprises shares his view on the marketplace’s courier partner.

“I must say it is (Vulcan) the most pathetic courier company I have seen till now because they never come to pick up on time and do a lot of problems while picking up shipments. Make unnecessary reasons and excuses for shipments pickup. They discarded many of my pickups due to shipment size but when I raised dispute, although pickup was done, but the same orders got returned to me back as RTO in some days. These things gave me a loss (sic),” states Ahmad. 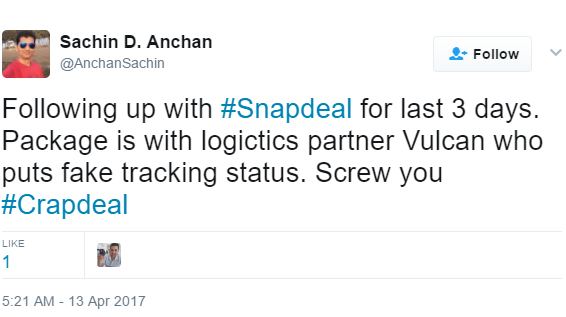 Speaking to IOS, online shopper Sachin Anchan says, “I have been shopping online for more than 10 years on various sites. This is by far my worst online shopping experience… My order was placed on Snapdeal on 01st April and it was dispatched on 03rd. It reached the courier centre my area on 10th April. Tracking status said its out for delivery but I never got the product. I called Snapdeal customer care on 10th, 11th and 13th. Each day getting the assurance that it will be delivered the next day. Its 15th and I still haven’t got my product.” 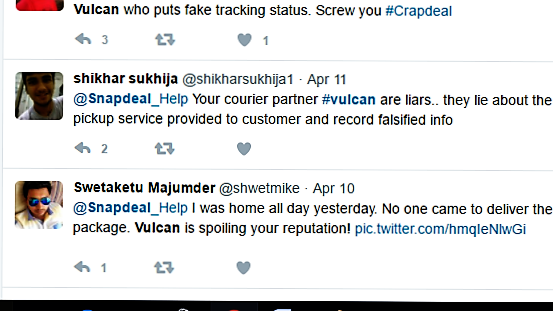 Snapdeal calls all the allegations against Vulcan ‘malicious’

After talking to several buyers and sellers, IOS forwarded the Vulcan related concerns to Snapdeal. We informed the etailer that as per sellers and customers’ inputs (backed with proofs), Vulcan often lies about attempted delivery and uploads fake/wrong delivery updates.

“Vulcan is known within the industry as one of the most trusted and reliable delivery partners. Any false delivery claims are malicious and without basis. As a standard protocol, we always ensure that we get the customers’ signature when a product is delivered. In cases where a product is being returned to sellers, we also ask for official business stamp in addition to receiver’s signature, for an additional level of verification,” says Snapdeal’s spokesperson to IOS.

Social media and the Internet are peppered with complaints related to Vulcan Express’ fake shipping details, and false delivery attempts. It is not very hard to find either. That’s why we wonder why Snapdeal is calling it ‘malicious and without basis’. IOS asked Chirag what he thinks about Snapdeal’s response to these allegations.

“The systems are not well aligned in Vulcan… this is clearly the inefficiency of the courier partner for which the cheat masters at Snapdeal are penalising the sellers. So, you know whom to trust and whom to not. Snapdeal is now in a habit of doing mistakes and let the sellers pay. They have done it time and again be it in packaging material or now in returns. They are not true to their employees and fooling them that they will turn profitable, so what else can be expected out of them now.”

Snapdeal’s investors are preparing the marketplace for its sale to Indian ecommerce leader Flipkart. The co-founders Kunal Bahl and Rohit Bansal would soon be counting $25 million each. Does that mean that they don’t care if sellers lose money and business?

From withholding seller payments, encouraging buyers’ fraud to denying Vulcan’s misdemeanours, Snapdeal sellers believe that the marketplace doesn’t really care.  There was a glimmer of hope when the ecommerce firm expressed interest in meeting vendors and resolving all their issues. But when millions are coming their way, would they have time to listen to sellers? Over to you, Snapdeal.