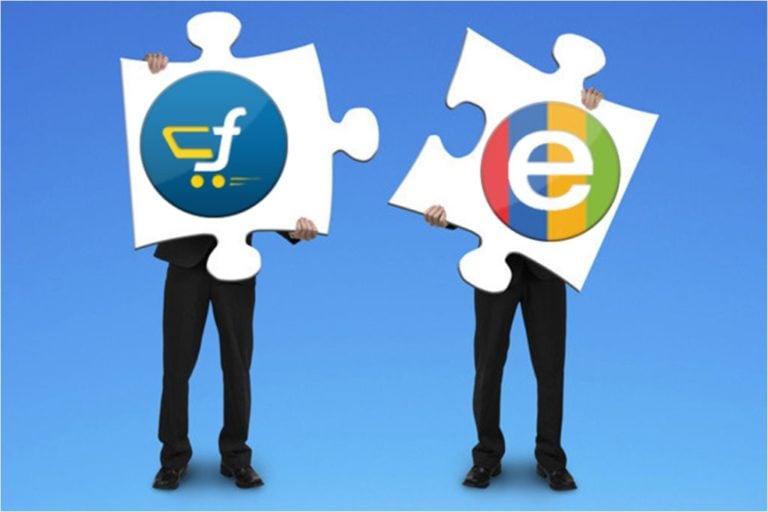 In spite of a cool $1 billion in its pocket, Flipkart’s thirst for funding has yet to be quenched. The online marketplace is looking for another $1 billion and it appears an acquisition is the best way to get it. US ecommerce company eBay invested in Flipkart during its latest funding round and now as a part of the deal, eBay’s Indian division will be absorbed by Flipkart in a cashless transaction.

Sources with knowledge of the developments at eBay stated that the foreign ecommerce company has made little headway in the industry since its launch in 2004. They claimed that the foreign etailer considered shutting down its operations in India. But, it still wants to continue as a part of the growing ecommerce in Indian, so it chooses to remain an investor.

When questioned about a likely acquisition, eBay’s spokesperson said, “eBay does not comment on rumour(s) or speculation.”

According to a senior official who worked for the company, “From eBay’s perspective, the company made the only minimal investment in the country, compared with other regions. So now they will have to take a call on whether they should start from scratch or start investing in other companies. In South Korea, they had a successful investment in Gmarket and Auction platforms. It is time for them to replicate it in India.”

Investments in Flipkart from eBay are a bit puzzling to sources, as the company has investments in Snapdeal as well, which is a rival of Flipkart. However, it has been rumoured that Flipkart could be talking to Snapdeal about a takeover.

There was major management shift when eBay India’s Latif Nathani moved back to the US after a decade as the country head of the company. The country manager is now Vidmay Maini.

What can we expect from a likely Flipkart-eBay merger?

A – Early consolidation in Indian ecommerce

First of all, Flipkart taking over eBay will mark the beginning of consolidation in the Indian ecommerce market. Etailers with smaller market share struggling for fresh funding could also be taken over by larger players in case eBay combines with Flipkart.

B – Bad news for Amazon and Paytm

Flipkart, Amazon and Snapdeal control 75% of Indian online retail. This offers very little room for smaller players to grow and flourish. If eBay joins Flipkart, we can expect a three-way battle between Flipkart – Amazon – Alibaba-backed Paytm. Snapdeal may not be a major competitor if it gets acquired by like rumours claim.

With soaring losses and the constant need to outdo each other, marketplaces are seeking funds to fight each other. Flipkart’s fresh funding may be meant to keep it from falling behind as Amazon and Paytm already have sufficient financial backing. Amazon India is expected to receive $5 billion as promised by its parent company and Paytm is obtaining major financial backing from the Alibaba group.

The eBay senior official also mentioned that with eBay under Flipkart, the Indian etailer will have global inventory. Flipkart will also gain access to a wider C2C market.

An analyst said that Flipkart is experiencing pressure to raise $2 billion to pave the way for some exits.

“This fresh fundraising is long overdue and should happen within a couple of months. Flipkart needs money badly to sustain its business. Also, the company plans to go ahead with IPO in 2018 as it finds it difficult to raise more funds any longer,” he claimed.

Flipkart has received a total of $3.15 billion as investment from main investors like Tiger Global, Accel Partners, Nasper, DST Global and Steadview Capital. The online retail platform has been looking for funding a long while, but investors stayed cautious as devaluations rained down on the company.

The ecommerce firm is still behind Amazon when it comes to transaction volumes. The analyst said, “Amazon India has more than 100 million products to Flipkart’s 80 million. Here, Flipkart should increase its volume in other major categories where Indian shoppers do have more liking.”

But, with eBay under its belt, it could achieve ecommerce supremacy.