Paytm at par with contenders in one sweep, with Alibaba’s stake in the etailer 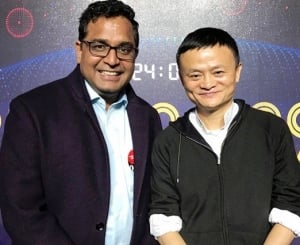 IOS had recently published a news on Alibaba investing in Paytm. We had wondered how this would affect the valuation of Amazon and Flipkart in the market. As predicted, Alibaba has bought a 4% stake in the company, taking its total valuation to $ 5 billion. The Chinese ecommerce giant has bought the shares from three companies that held a stake in One97 (Paytm’s parent company) namely – SAP Ventures, SVB (Saama) and Reliance Capital. Majority shares of 19% remains with founder Vijay Shekhar Sharma.

While there was no official word from One97, speculations have pegged the company’s current value to be anywhere between $5.7 and 5.9 billion.

Catching up with the competition

A combination of Paytm’s share sale and Flipkart’s recurrent devaluation have put both on approximately the same scale. The latest Morgan Stanley devaluation has put Flipkart at $5.37 billion. That puts the company even below Paytm. Of course, nothing is set in stone, and the figures are only assumptions, as neither company has revealed any figures.

However, reports point out that the rate at which Alibaba has bought the shares from SVB and SAP could be almost fifty times their original investment.

Paytm has come a long way from the mobile recharge facility it provided to an ecommerce company pitted against titans like Flipkart and Amazon. Launched in 2010, the company introduced its mobile wallet in 2013. 2015 saw Alibaba kick start talks with the company on buying a share. That was also the year when Ratan Tata invested in the company in his personal capacity.

November’s demonetisation has helped the company’s fortunes in no small measure, with everyone from online sellers to shoppers to every offline business rushing to download the mobile wallet.

Sharma had revealed recently that there were plans to raise Rs. 1,000 crore for Paytm ecommerce. There were talks about a possible joint venture with Snapdeal, but all that remains to be seen.

As of now, the company is on a roll, with investors flocking to its doorstep. Sharma’s rise is a classic story of rags to riches, and he seems to have the Midas touch when it comes to business. In the race to profitability, will Paytm make it to the finish line first?