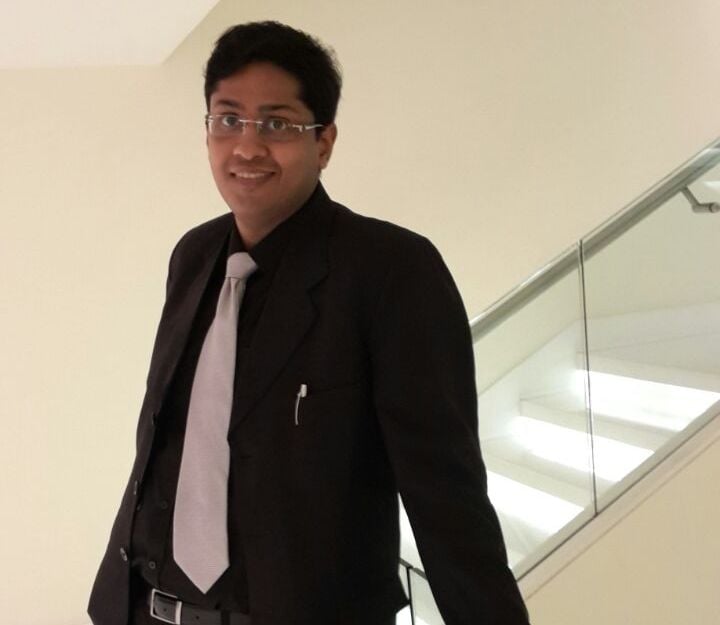 The main purpose of Seller Support is to resolve your issues. However, IOS has revealed how in online retail this system is slow and ineffective sometimes when sellers raise issues. We recently received a tip from online seller Chirag Jain about Snapdeal’s impossibly slow seller support and their lack of ethics when it comes to resolving seller issues. In spite of following procedure and waiting for days, sadly the seller informs us that he never received any solutions to his issue.

Chirag Jain, like other sellers online is looking to do business. He runs his successful business brand A Grade Retail from Ambala Cantt. The 31 year old started selling in 2014 and has a total of 2.5 years experience in online retail. He has spread his business across 4 categories – Home furnishing, kitchen tools, men’s apparel and baby products. He began selling on Snapdeal and other marketplaces because he was captivated by the scope of doing business online and selling across the nation.

Let’s look deeper into Chirag’s issue on Snapdeal and why he feels the marketplace has handled things poorly.

IOS: When did Snapdeal suspend your account? What was your response?

They suspended our account on 11th January without any intimation. When I saw the catalogue section on the seller panel, I found all my products reflecting in the Not Live section. 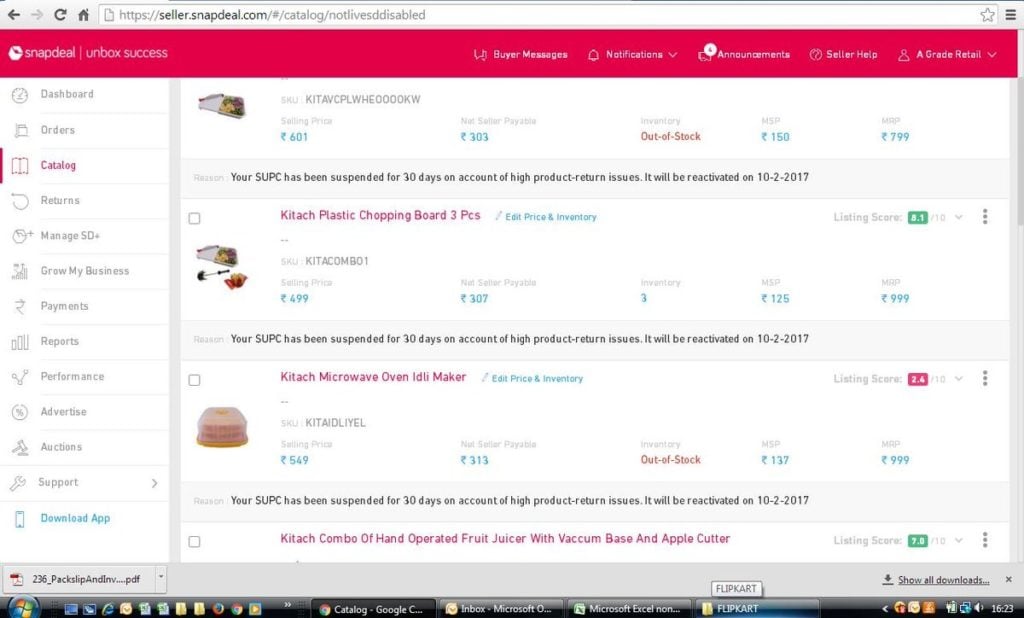 I immediately raised the dispute on twitter. This is because most of the times, the seller panel’s response takes days. And, they would just come up with a quote like:

‘We are looking into this’

Then they hibernate for days and sometimes even months. Sometimes, even tagging Snapdeal Seller Help is slow in terms of response. So, I tagged Kunal Bahl, the CEO and they responded immediately.

IOS: Why was your account suspended? Was the provided reason fair?

Reason by Snapdeal: Your SUPC has been suspended for 30 days on account of high product return issues. It will be reactivated on 10-2-2017.

The reason is unfair. We had 26 orders successfully processed from 9th November till say the last 2 months. Out of these, only one product came back which was a set of 6 table mats.

The complaint was that product is defective.

The product is actually of organdi material with net like visibility. The main thread is white but one can partially see through the product.

On opening the returned product we found one mat missing and raised the complaint within the stipulated period of 7 days. This was a partial return, we sent a set of 6 mats and in return we found only 5. One piece was missing.

The seller executive called back and informed us they were ready to reimburse 15% which was close to approximately 16.67% of the product value and we agreed. So, the ticket was closed. The complaint made was fake because the customer claimed that the product was defective and said the product was transparent whereas the product was 100% as per the images and specifications mentioned on Snapdeal.

Now, the seller support person calls us and tells us, we are suspending your account for a month because you raise a lot of return disputes, then that’s totally unethical. There is a provision available but we are not misusing it. Only when we find discrepancy we complain, otherwise we openly accept the product and bear the return charges too.

This clearly puts a question mark on Snapdeal’s intentions. That is, it does not want to bear any costs for loss/damage of the products returned to the seller. This is surely miles away from fair business practices.

The seller support executive tells us, “Since you are raising disputes again and again, we ask you to shift your inventory to our warehouse and opt for SD+. This will put an end to you raising disputes.”

By now it was pretty clear that this is new way Snapdeal used to force sellers into SD+. We warned him about the unethical practices of forcing a seller and clearly told him that this strategy will draw his management’s attention in both print and social media. But the seller support executive is helpless as he will do what he is asked to do.

Basically, this is a tactic to forcefully extract money out of the seller’s pocket.

At warehouses, the seller bears per cubic feet costs per month, and if the product does not sell, he is basically paying the rent for an overcapacity infrastructure just because the top management has taken a wrong strategic call.

IOS: You informed us via Twitter that Snapdeal randomly moves your products to SD+ and disables your top selling items. When did you notice this happening?

How Snapdeal changes products from Dropship to SD+ is something which only they know and understand.

We generally keep a tab on good selling products through the seller panel to procure new stocks of fast selling products. We employ rigorous quality checks both once the goods reach us and also before final packaging. Any sort of damage is rejected as sending a damaged product is sure to come back to us. We followed this practice from day 1.

Earlier we were assigned account managers who acted as our point of contacts for resolving issues quickly. But even then trying issues of re-shifting back to Snapdeal Dropship took months to resolve and heavy toll on sales plans.

I remember in March 2015 I had ordered a good amount of inventory of a star selling product and they moved it to SD+. I was still following up with account managers and my last correspondence on this was on 18th of September 2015 in this SD+ fiasco. What didn’t sink into their mind was that eventually, they bore the loss of sales too.

IOS: Have you experienced any other issues with Snapdeal? Or were these the etailer’s major pitfalls for you?

There have been other issues Chirag faced on Snapdeal. He lists them out as follows:

In 2014, Snapdeal had lots of t-shirts displayed on mannequins, ghost mannequins or images of them simply kept flat on tables. So, we tried the flat out approach.

It was like every few months they changed policies. Further, when I explored items for next season they gave us image guidelines in which they showed the models for T-shirts sporting goggles as good images. But then when we shot images of models with goggles and listed the images, they rejected them citing a fresh policy change.

This one happened in September. With the launch of Unbox Zindagi, they rendered the old packaging material unusable anymore.

The taxation department needs to look into this. Other portals are all fair in this regard. Flipkart’s material has to be ordered online with actual tax rates and it is much cheaper than Snapdeal’s and of much higher quality also.

Low sales during the peak season

As of now, our sales are very low. Last year i.e. until September 2015 it was a good number. If I consider from June 2014 till date then it was around 60-70 orders per month. After last September, they introduced the concept of *courier capacity exhausted which hit the sales badly.

Even if you wanted to overcome this courier issue you were shown only one route: Go to SD+.

So before September last year, it was a good number of 100-150 orders a month.

* Courier capacity exhausted means, during the festive season any seller who is not on SD+ will get limited orders. After some time if there are too many orders, they would deactivate your SKUs so more orders do not come to you for processing thereby impacting sales during the peak season.

No regard for seller goods

At the Snapdeal courier centres, employees don’t even get chairs to sit on. So, they use customer orders as their seats. And, when sellers request Snapdeal to get paid for the product damages, they just block the accounts.

Here’s a picture to explain what Chirag’s talking about: 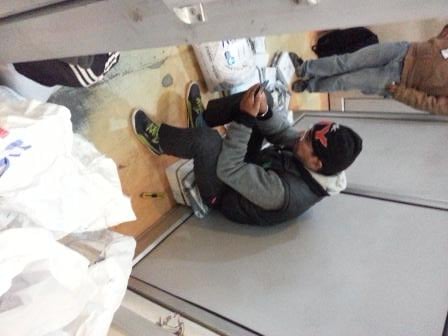 IOS: Do you face similar issues on other marketplaces as well?

The rest of the portals we work with have clear guidelines. They don’t make such overnight announcements.

Case in Point: Flipkart said in September that it will be mandatory to use Flipkart branded packaging material, but when sellers placed requests with them that we have already bought plain packaging for the season they gave ample time of a quarter to finish that off. It was a fair enough deal.

IOS: Has quitting Snapdeal ever crossed your mind?

Till date, we have listed 500+ products with Snapdeal. We have already discontinued a lot. With the kind of abrupt and unfriendly seller policies they have, we have now limited to our listings to only 132 products on Snapdeal.

If you ask us particularly with Snapdeal we would prefer to quit online retail and suggest others to also quit. As of now, we have stopped procurement of the products that got us an audience on Snapdeal. The focus is now shifting to other portals like Paytm. We are also considering the launch of something of our own.

Have you also experienced unethical suggestions from Snapdeal’s seller support? Do you think quitting the marketplace will teach it the lesson it needs to learn? Tell us what you think in the comments below.

Next Article Amazon Business Seller Program taking sales to next level? How can you join?