Why is Amazon’s Seller Support service not at par with its customer service?

One hears mostly great things about Amazon India’s customer service on social media platforms, knowledge sharing portals and review sites. From sending out free products to compensate for late delivery or cancellation to replying within minutes of submitting a complaint, Indian online shoppers seem to be mighty impressed with the American etailer. But the same can’t be said about its seller support service.

The dwindling quality of service

Between Snapdeal’s compulsive lying and Flipkart’s indifferent attitude, Amazon India was a clear favourite of sellers. But the opinion is changing as the US-based ecommerce giant’s quality of service is going down gradually. 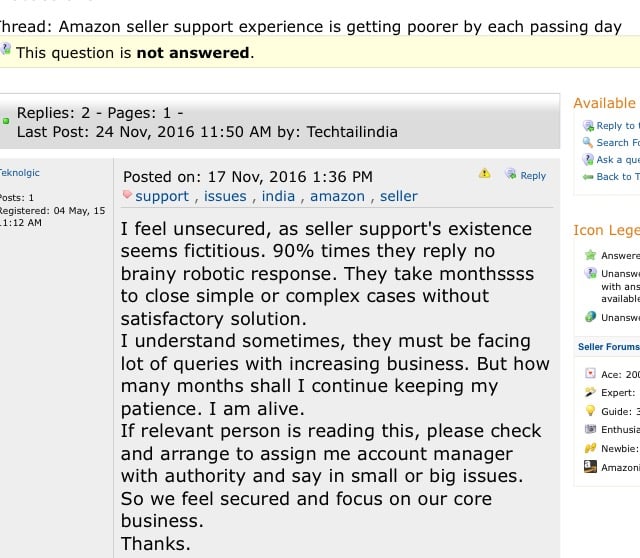 Some of the common complaints are:

“I started selling on Amazon 6 months back. Based on my journey so far, I have formed an opinion that Amazon’s seller support is the worst. Junior executives don’t understand the problems nor are capable enough to resolve the issues. Seniors say that they understand the situation, but its only formality. They only forward the issues to each other, again and again, that’s it,” says online seller GS while speaking to Indian Online Seller.

“They do not have proper co-ordination, proper management of ticket and do not give a proper time frame to sort out a particular issue,” adds GS.

For the most part of his online selling experience, Sanchit Goyal was happy with Amazon’s service and had no major issues with the seller support team. Thanks to the swift responses coupled with the ease of tracking issues, he was satisfied with the ecommerce biggie’s approach. But in the past one month, the service standard has slipped down.

“I had no major issues with seller support until Amazon decided to put my account ‘under review’ for reasons best known to them. There was no defect on my account and all matrix are correct. Now it has been 20 days and I have written multiple emails to their account evaluation team and not a single reply has been received. I talked with the local Amazon representative as well as the one who said he had “escalated” the case but nothing has been done. So since past 20 days I had put my account on holiday mode and not selling on Amazon currently until I hear back from them on why it was put under review or when it would be reinstated. On Amazon it comes under a different team than seller support but overall it’s not a good experience when your payments are put on hold without any reason and no explanation is given!”

Inability to provide satisfactory solution to the big problems

Many sellers assert that Amazon’s seller support service is quick when it comes to resolving small issues. But big concerns often receive either no reply or a copy-pasted answer, which is mostly unhelpful. 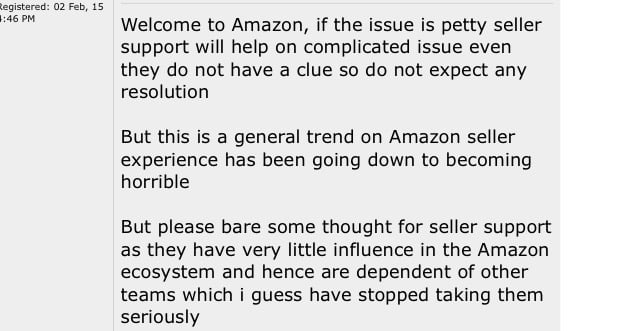 “Yes, minor issues are resolved but some major issues, for example pickup related issue, technical issues, like ‘brand visibility on site’ are not easily resolved even after 30-40 days and repeated calls,” states seller GS.

Besides being known as ‘Earth’s most consumer-centric company’, Amazon is also famous as world’s most secretive company. The etailer has little sympathy for sellers, and follows its rules too stringently without being even 1% flexible. They have no problem in bending rules for customers, but not for sellers.

Another issue is their lack of accessibility or approachability. In most cases, sellers can only mail the seller support team with no direct availability on call.

“Unfortunately we may not be able to arrange for the call back, as the Seller Performance team operates only on Emails,” wrote an Amazon executive in response to a seller’s query on seller central.

We get it – allowing thousands of sellers to call directly don’t seem to be a practical solution. But when no one responds to emails even after months, vendors feel like they are talking to a wall.

“We are hitting against a dead wall with them despite a long-standing good seller reputation… It looks like we are dealing with a team that sits in its own ivory tower, doing nothing except stonewalling, and nobody can touch them,” a seller wrote in her Facebook post about the futile attempt to get in touch with Amazon’s seller support.

Has off-shoring led to this issue?

Amazon’s poor merchant service is not limited to India. Vendors based in the US and other countries too have similar complaints. Many believe that the issues got worse after the American ecommerce giant outsourced its services to other countries including India. Besides the obvious language barrier, the new executives from out-shoring destinations often find it difficult to understand the issue, according to global sellers. If things continue to be like this, then Amazon India will start losing loyal vendors very soon. There is a growing sense of insecurity among sellers as the marketplace keeps stonewalling queries raised by them. And no business can grow in a hostile environment.

Emails/messages sent to Amazon from our end  to address these issues elicited no response.