Delayed payments don’t seem to be unusual on online marketplaces lately. But waiting for payments worth lakhs of rupees, definitely, spells trouble. Askmebazaar sellers have been denied payments for almost a year. The Askme group finally came forward with the truth about its lack of finances due to investor Astro’s misdeeds. Its etail business shut down and its website is no longer active.

The same happened with NDTV’s Indianroots. The ecommerce platform started off well. It also broke even within 8 months from setting-up. But now, sellers state that they have not been receiving their dues. Some even since 2015, IOS recently uncovered.

Looks like denied payments is an escalating issue for online sellers because recently IOS was alerted about another etailer refusing to pay sellers – Voonik.

Indian Online Seller was marked in an email by an online seller from Surat, in addition to various authorities and governing bodies. The chambers of commerce, state governments, fraud investigation authorities and the cyber crime division, even Voonik officials, investors and other Voonik sellers were marked in this email.

Why such a bulky address bar? For this group of Voonik sellers in Surat to get justice!

According to the email from Alpesh Vastapara, an ethnic wear merchant, Voonik has not made payments to him for over 5 months. He spent 3 of those months trying to get in touch with Voonik but received unsatisfactory responses from its officials.

“I did work as per the Voonik policy but I didn’t receive payment from Voonik as I should,” he says in his email.

Voonik owes Soham Fashion, Alpesh’s ecommerce brand, approximately Rs. 5 lakhs for false product returns, he claims. The ecommerce company refuses to resolve the matter or even acknowledge it, he goes on to state. But he’s not the only one, more Voonik sellers from Surat haven’t been receiving payment too, as per responses to Alpesh’s email.

In his email, Alpesh points out that these points are the root cause for his pending payments from Voonik:

“1. We are being charged RTO of Rs.140 even though the reason for returns have nothing to do with the seller. The products are also returned only after 2-3 months.

2. 23% commission is charged on every product returned.

3. Sometimes products are not even returned. Voonik doesn’t provide proof of delivery (pod), neither does it repay the money of the product. Even if proof of delivery is given the information provided is false.

4. If they agreed to pay for lost products they still charge commission and courier charges, even after covering this when the product was delivered to the customer.

Is Voonik trying to cover up its tracks? These sellers question

Alpesh’s email states that Voonik officers do not reply properly despite regular attempts to connect with them and discuss the pending payments issue. It also mentions that they provide improper data and incorrect accounts.

Rachesh Savsaviya, another ethnic wear seller from Surat, mentions that he faces the same problem and is owed a total of 50 lakhs, as a result of unfair deductions. When wrongfully charged, he asked for payment details.

“They did not provide me proper payment details. They are providing me with fake data and have not given details of 7000 orders which I shipped on time,” he says in response to the email Alpesh started.

Pradip Savsaviya, the owner of Shayona Creation mentions similar details in his reply, so does online seller Ashvin Nakarani, who sells under the brand Sanskruti Fashion.

2. Delayed responses and no action at all

When an online seller faces payment difficulties he must raise a ticket. After raising tickets, these Surat sellers received the promise of a 30-day resolution. 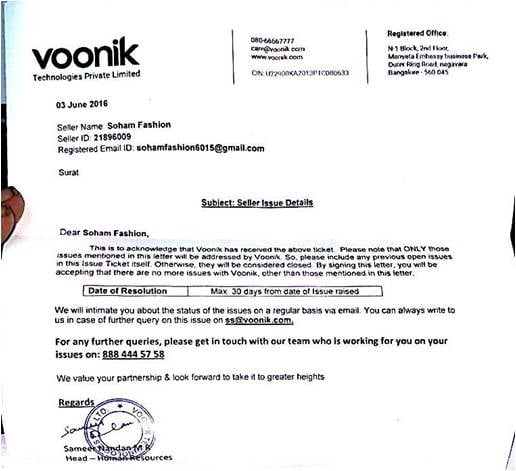 The sellers stuck in this unfortunate mess, made it a point to visit the Voonik office in Surat. This they did when their calls were ignored and their tickets were left pending. However, the office shut down in Surat and was relocated to Ahmedabad, say Madhuram Trade,  Sanjay Vastapara, Rachesh Savsaviya, Pradip Savsaviya (proprietor of Shayona Creation), Ashvin Nakarani (proprietor of Sanskruti Fashion) and Yogesh Dankhara (of Om Fashion) in response to Alpesh’s email.

In their emails to multiple authorities, these sellers claim that they have resorted to emailing authorities as they feel it could help them in recovering their payments from Voonik. Citing stress and a feeling of defeat, this group of sellers are hoping for a speedy process of resolving the state of affairs.

Here’s Voonik’s side of the story

Like the sellers, even we couldn’t help but wonder if the payment deduction system at Voonik may have gone haywire. The etailer explained the payment process and grievance redressal measures in place.

Voonik spokesperson: We follow a fifteen-day payment cycle with all Sellers. There is no delay in payments from Voonik’s side; all payments are made in consonance with our Seller policies, which are intimated to the Sellers at the time of on-boarding and which are available to Sellers on the Voonik Seller Panel.

Sellers can raise grievances with Voonik at any time through their account on the Voonik Seller Panel. All such grievances and disputes are immediately routed to the appropriate team, with an immediate acknowledgement of receipt going out to the Seller. Within 48 hours of receipt, a member of our Seller Support Team provides the first email response on the issue raised. Where the issue persists, the Seller Support Team calls the Seller and clarifies the issue, providing all related documents to resolve the issue.

IOS: How are sellers alerted about product returns, are they given proof of delivery?

Voonik spokesperson: Voonik does not have its own courier service. The Sellers on the Voonik platform are provided with free technology integration with the logistics partner’s systems.

Accordingly, when a return is initiated by a customer, the Seller gets an update on his account on the Voonik Seller Panel. The respective courier partners return the products within the specified timelines, and take the signatures of the Seller on their delivery run sheets. Intimation of completion of return is again intimated through the Seller Panel.

In case of disputes, the seller can raise a request for Proof of Delivery via seller panel, within the timelines specified. The request will go to the respective courier partner to provide the same.

IOS: So why do the above sellers feel ignored?

Voonik spokesperson: We have more than 20,000 registered sellers doing business with Voonik, of which 7200 are active from Surat itself. This complaint you are referring to is coming from a handful of blacklisted sellers, who indulged in malicious activities including the following, and hence were blacklisted on our platform:

– they violated many of our policies and guidelines for transacting on the platform,

– their products invariably failed our most basic quality checks,

– numerous customer complaints were received about their products,

– they have raised unfounded disputes for each payment cycle, with claims that fluctuated dramatically when provided with contrary documentary evidence from our team.

Multiple rounds of discussions were held in Surat and in Mumbai with these Sellers.

IOS: And the Surat office shutdown?

Voonik spokesperson: Being a company with a pure marketplace model, all operations of Voonik are centralized and conducted directly from Bangalore. Our office in Surat was merely a small sales office setup for initial acquisition of sellers. Now that we have acquired a large seller base in Surat, we are moving to other adjacent cities. Seller account management and seller support was always based out of Bangalore and never managed in local sales offices.

Previous Article Snapdeal is getting a makeover; just what the doctor ordered to fight competition?

Next Article Flipkart devalued a 3rd time by Morgan Stanley; How significant is it this time?