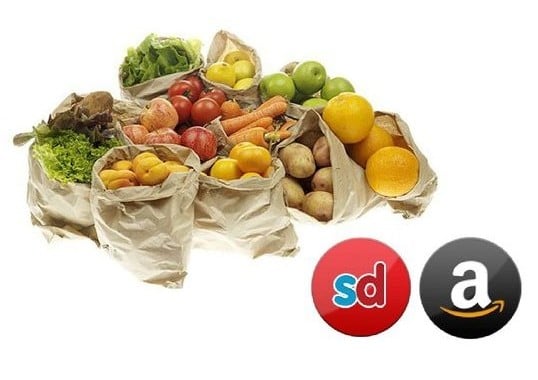 The egrocery sector is all the rage right now with online delivery players, which include the likes of GrocerMax, ZopNow, Grofers and BigBasket, all marking their territory, while established business houses like Tata, Reliance and Godrej are also getting in on the act.

We recently observed online grocer 24x7Fresh launch its breakfast delivery service to tap into the ‘daily needs’ online grocery segment, which it hoped would differentiate itself from the competition. It was only a matter of time before the big ecommerce players stepped up their game to bring similar daily offerings to the table. Flipkart released its grocery app, ‘Flipkart nearby’ and now Amazon has launched ‘Super Value Day’, while Snapdeal has introduced the ‘General Store’.

Last year Amazon India launched the ‘Amazon Pick up’ service and also enticed customers with a gourmet and specialty food store. This time around, Amazon has come up with a delicious offering that will tickle the taste buds of even the most strictest gastronomic connoisseur, by introducing the ‘Super Value Day Store’. It is expected to provide the shopper with a greater brand variety to select from.

On the first and second day of every month, Amazon will offer the following cash back offer:

Amazon will further offer the following to sweeten the deals:

“The gourmet and specialty food store on Amazon.in offers over 12,000 Indian and imported products. We have launched Amazon Super Value Days on the first two days of every month when a lot of online grocery shopping happens… The response from the customers since the launch has been quite encouraging,” said Saurabh Srivastava, category leader, FMCG, Amazon India.

Snapdeal has launched ‘General Store’ which aims to provide delicious discounts which it hopes will be savoured by the customer. It has also recently invested in online grocer ‘PepperTap’. Through this association it plans to tap the online hyper-local grocery marketplace further.

“Groceries is a very important category for us. It forms a large part of consumer spending in India. We are working towards becoming the country’s most impactful digital commerce system. This is a category of products that touches the lives of people everyday,” a Snapdeal spokesperson added.

Eating humble pie or biting a chunk of the egrocery pie?

Food and grocery accounted for 69% of India’s $490-billion retail sector in 2013, according to India Brand Equity Foundation. Many believe that online grocery will be the next big thing in online retail.

How quickly customers go from swapping the market or local kirana shop to sourcing their daily products online remains to be seen. One thing is for sure there is no shortage of candidates lining up to bite into the potentially huge egrocery pie.