Home  »  Flipkart • In The News • Marketplace Watch  »  After Myntra, Flipkart too dabbles in social shopping; developing its Ping social network 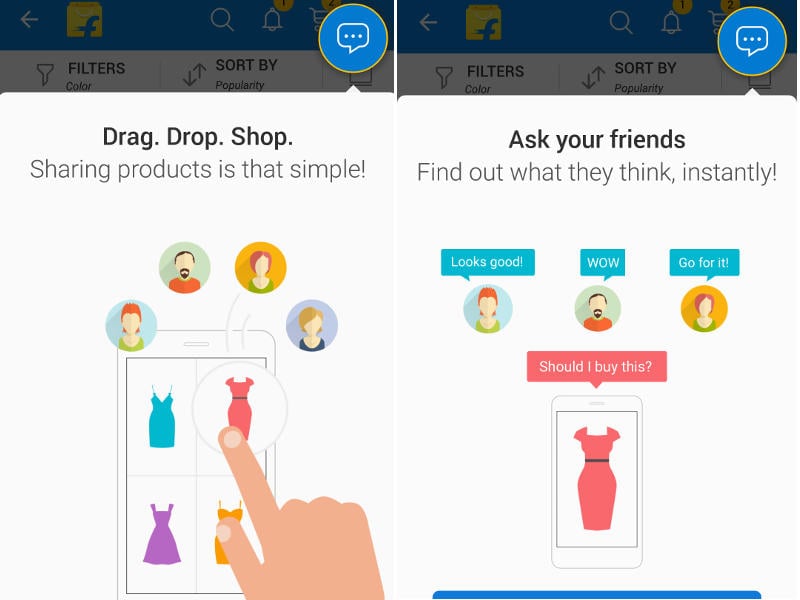 Didn’t we tell you about online fashion retailer, Myntra’s aspiration to be the Facebook of fashion ecommerce?

Turns out, Myntra is not the only one that aspires that. Online marketplace, Flipkart is going to follow suit with the launch of a new mobile app feature, ‘Flipkart Ping’.

This feature will enable shoppers to interact with their friends while shopping. The idea is to make mobile shopping a social and engaging experience as opposed to a solitary experience.

Punit Soni, Chief Product Officer at Flipkart said, “Shopping is primarily a social activity and going for it with friends and family has been the norm since time immemorial. Online shopping, on the other hand, has largely remained a solo experience. ‘Ping’ aims to transform online shopping by allowing users to talk to each other real time in order to make decisions and decide on what to buy!”

For now Flipkart Ping chat is an ‘invite-only’ feature, as it is an experimental phase. Every user that receives an invite, he/she will be able to extend invitation to 10 of their friends.

While explaining this ‘invite-only’ element, Soni said, “We will decide invites based on areas and certain age groups. Areas where there’s more density of Flipkart users, where we know that their friends are also likely to use the feature, will get the invites first. Also we know that a certain age-group is more likely to take to this faster, so that too will be a criteria.”

Focus on mobile platform, but no word on going app-only

Rumour was that Flipkart will be app-only from September. Although, the plans are put on hold for the time being. Nevertheless, this hasn’t stopped the marketplace from constantly upgrading and focussing on its mobile platform exclusively. This is to ensure that the transition (if and when it happens) from desktop to app is as smooth as possible.

Laying emphasis on the same, Soni opened up, “We are focusing on mobile. There is a huge market, 900 million people today have mobile phones in the country… However, there is no timeline on shutting down any other format.”

The Ping social network is one such bait to keep the existing Flipkart app users interested & happy and persuade more shoppers to join their mobile platform. Similar moves by Flipkart to strengthen its mobile platform were phasing out desktop ads, acquiring Appiterate, introducing ‘image search’ feature on app, and introducing Product Listing Ads on app.