With every burgeoning year, the Indian ecommerce Industry gets better and better. At the forefront of this phenomenon, is the spike in sales during the festive sale period which coincides with many traditional holidays and events. While festivals and holidays take place throughout the year in India, the October to December period is widely considered the festive sales period, as it fits in nicely with a lot of celebrated holidays, like Diwali.

As online sellers it is very important to forecast for busy holiday sale periods and plan accordingly to ensure enough inventory is available to meet demand. It is also essential to execute effective promotional campaigns to make sure you get your message across in time, as there is a lot of cash up for grabs.

So just how much money changes hands during the busy festive period?

In October 2015, before the festive sales sprang into action an insightful ASSOCHAM report proclaimed that this year’s festive season would cross $8 billion, 5 times bigger than the previous year. It also included 5 Indian festivals in no particular order that would contribute to the total: 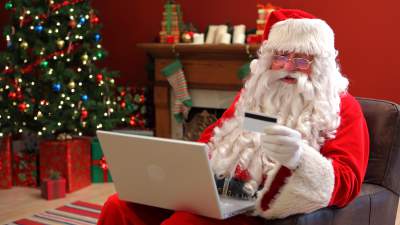 The biggies’ take on festival sales

The recent festive season was dominated by Flipkart’s ‘Big Billion Days sale’, Snapdeal’s ‘Yeh Diwali Dil ki Deal Wali’ sale and Amazon’s ‘Great Indian Festive Sale’. It is very interesting to read what the big 2 homegrown ecommerce marketplaces had to say about holiday sales in 2013, a year before their respective festive sales exploded.

“Seasonal offers and the occasion of gifting during festivals definitely create significant spikes in sales. There is a sizeable consumer demand that companies like ours can tap into. However there is still a long way to go before it assumes the proportions that larger markets like US & China see, said Ravi Vora, Former Senior VP Marketing, Flipkart.

“eCommerce companies like Snapdeal.com offer competitive prices throughout the year making products more affordable than offline stores. However the festive season does bring in a greater wave of enthusiasm for all the companies including eCommerce companies. This a global trend which is being witnessed in different parts of the world. While December is a key month for UK and US retailers, in India October & November are the most crucial months where breakthrough, sales are generally witnessed,” stated Amit Maheshwari, Former Head of Fashion category, Snapdeal.

So how did the Marketplaces get on during the recent festival period?

In 2014 the big marketplaces suffered from inexperience in dealing with massive orders, which caused server problems and delivery issues. Thankfully in 2015 they were better prepared. For instance in 2014, Flipkart’s Big Billion Day sale was carried out on one single day, but in 2015 it spread the Big Billion Days sale over 5 days as it chased a target of Rs. 3,250 crores sales. In comparison, ambitious marketplace Shopclues announced a target of Rs. 1,600 crores for the festive period.

The below table with statistics collected from Similarweb shows the desktop and mobile website traffic the big ecommerce marketplaces dealt with during the festive period. 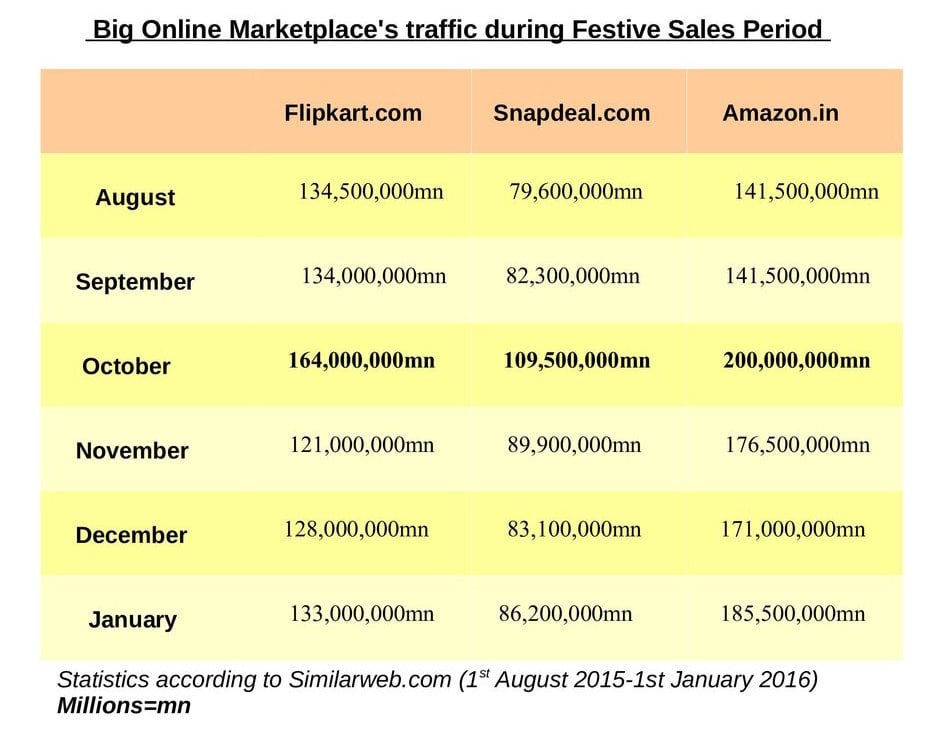 For all three marketplaces the month of October generated the most traffic. This however does not tell the whole picture as Flipkart’s Big Billion Days sale was app-only in 2015 which means traffic would have been even higher.

Flipkart’s Big Billion Days sale and Amazon’s Great Indian Festive Sale were conducted from the 13th to 17th of October, while Snapdeal chose to promote a different category every Monday during its ‘Yeh Diwali Dil ki Deal Wali’ sale. Amazon took advantage of Navratri festival which fell on 13th to 22nd October last year and held its Great Indian Festival Sale, which also coincided with Flipkart’s Big Billion Days sale. This IOS article gives a glance at the busy 5 day sale period of the big marketplaces. The marketplaces also created many opportunities for online sellers which was pleasing to see.

What Online Sellers and experts had to say about ecommerce festivals?

We asked online sellers their opinion on which 5 festivals and holidays impact ecommerce in India, based on their experience in the industry. This is what they had to say:

“Valentine’s Day has a lot of good options available and people come searching online. Raksha Bandhan, as it becomes helpful to directly send gifts to siblings through pre-payment. Navratri, as it is the period after Shraadh and it coincides with Big Billion Days sale. Eid, as it is a family event and bulk purchasing for gifting happens across categories. Christmas is another big one, as post-Diwali sales are spiked again during Christmas,” stated Kush Agarwal, Uber Urban.

“Diwali is one of the most celebrated festivals across the country. Republic Day (26th January) and Independence Day (15th August), as both these dates relate to patriotism along with being countrywide holidays, so people have time to go shopping. Raksha Bandhan, as this festival shows the bond between brother and sister and so a lot of gifting takes place which is celebrated across the country. Pongal as this festival has to do with the New Year as well as agriculture. India being an Agri-based country this occasion is celebrated and people go shopping in small B and C grade cities. Ganesha festival, which is celebrated mostly in the West and South of India. People get into the shopping mood as it falls at the start of the shopping fest in India,” remarked Sumit Zalawadia, storyathome.com.

We can clearly see from these online sellers opinions that there are quite a number of different occasions that sellers can promote their products and services to increase sales.

Is it festive holidays that sellers should be planning for?

While giving his views on the most important ecommerce events in the calendar, Category Manager, Devashish Naik from Multi-channel ecommerce solutions provider, Browntape, explained that it is actually the pre-sales period that sellers should plan for.

“While Diwali, Christmas/New year, Republic Day, Independence Day and Valentine’s Day would be the main Indian holidays for sellers to plan for, it is actually the Pre-sales period that will make the difference,” explained Naik. The weeks leading up to these days is where the spike in sales actually happens. Usually on the actual days online customers are busy with their families, added Naik.

Are all festive events relevant for sellers?

Naik’s Browntape colleague, Category Manager, Minaz Sajan voiced similar sentiments and went on to add that while major holidays are important it is also imperative for sellers to realise that not all holidays sales will be relevant for their product.

“Over the last few years, Flipkart’s Big Billion Days sale, Amazon’s Great Indian Festive Sale, Myntra’s End of Reason Sale, the Republic Day sales and now slowly Black Friday/ Cyber Monday have emerged as the biggest sale periods in Indian online shoppers calendar,” remarked Sajan. “What is important to note is that each category is different, for example apparel has four seasons (Autumn, Spring, Summer and Winter) and sales are usually tailored around these times. Also new types of sales are becoming more relevant such as ‘back to School’ sale, so sellers now cannot just plan for spikes during traditional festive days,” added Sajan.

From the above statements, what is intriguing is the fact that events such as Valentine’s Day, Black Friday & Cyber Monday which are not considered traditional events in India, are slowly creeping into the shopping calendar. This Business Insider article ranks Diwali in 3rd place among the global ecommerce holidays so we are now coming full circle: Only recently we saw the success of Valentine’s Day in India which achieved on average bigger ticket size purchases than Diwali. Also last year we witnessed eBay hosting an extended Black Friday sale in the country to entice Indian Shoppers.

This also works out well for Indian sellers as there are now opportunities to take part in global selling events. For example during the recent Black Friday and Cyber Monday Sales in the US, the Amazon Global Seller Program allowed Indian Sellers to participate by stocking up on their products in advance. Items that might be snapped up by Indian NRI’s in the US such as traditional clothing got priority as there is a big market for non-resident Indians abroad attempting to keep traditions alive.

Mind you not all Global sales will be successful. As more events compete for a share of the consumer’s wallet, some will succeed while others will perish. Take for instance in 2015, Google wound down its Great Online Shopping Festival, while on the other hand Alibaba threw caution to the wind and went out and broke the online shopping record on Singles Day.

Great opportunities ahead for sellers

To conclude with we have identified 3 key opportunities for Indian Online Sellers in regards to prosperous ecommerce shopping festivals:

With an exceedingly high number of traditional holidays being celebrated in India, which includes everything from Pongol to Raksha Bandhan, there are certainly a lot dates for online sellers to ponder over. Paytm even mentioned the contribution of the Indian Wedding season to its sales.

The rise of Marketplace events such as Flipkart’s Big Billion Days Sale to coincide with Navratri and Myntra’s ‘End of Reason Sale’ to follow the end of a fashion season, have struck a chord with shoppers and sellers alike.

Global Occasions like Black Friday and Cyber Monday are also providing great scope for Indian online sellers to trade across borders. To put things in perspective, currently the Indian Festive season is worth $8 billion, while in the US it has touched $69 billion.

The important thing for Online sellers to keep in mind, is to recognise which sales will suit your products and then go out and plan for them like there is no tomorrow!

Previous Article Indian Online Retail to achieve phenomenal growth by 2020; but could it catch up with China?

Next Article Is Snapdeal on the verge of fading out or profitability?