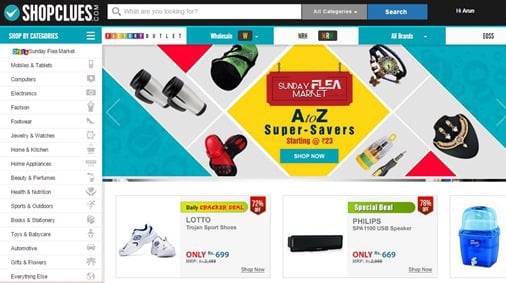 Online Marketplace, ShopClues has joined the elite Unicorn group of ecommerce firms, by achieving a 1 billion dollar valuation after receiving more funding. The money is thought to be in the region of $100 to 140 million, although the figure has not been confirmed by ShopClues.

Sovereign wealth fund, GIC pte Ltd who has invested in China’s ecommerce giant Alibaba, took part in the latest funding in a major way. Tiger Global Management and Nexus Venture Partners who have already backed ShopClues in the past also added to their stock. The company is now worth over $1.1 billion and an IPO is on the cards in 2017.

“The money is expected to come in tranches,” according to someone close to the development.

ShopClues, which targets becoming profitable in 2017, plans to use the new funds to empower small and medium sized sellers. It is developing cutting edge technology, to help sellers go digital and embrace cloud computing in a big way. ShopClues also aims to become the fourth ecommerce company to register a 1 billion dollar GMV, with the help of its innovative sellers.

ShopClues at a glance:

“Today, we are the dominant player in low price-point and unstructured categories like lifestyle, home, kitchen, electronic and automotive accessories, etc. Our focus on selection, value and trusted shopping for Indian middle-class consumers has given us tremendous scale with a rapidly growing buyer and merchant network. We are confident that our capital efficiency and execution will make this our last fund raise before we become profitable with the eventual IPO in 2017,” said Radhika Aggarwal, co-founder and chief business officer at ShopClues.

Next Article [Infographic] 32% e-consumers browse through deals and catalogues once a day at least !!