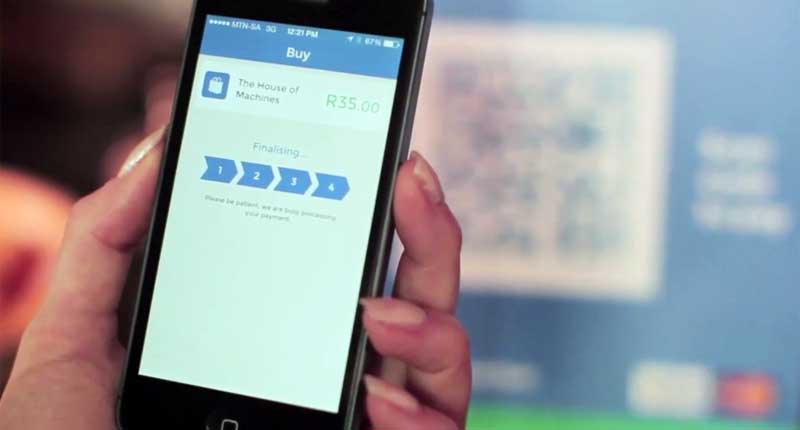 But there will be new dominating trends that will mould ecommerce in 2016. Seeds of these trends have already been sown but it will pierce the earth and grow strong in the coming year. Ecommerce companies invested heavily in data & technology in 2015. Whether it was investing in high-tech tools, data & analytics, or getting best techies to build a strong team, etailers have laid a strong technological foundation in 2015 to be able to take flight in 2016.

The idea is to provide to offer social, predictive and real-life shopping experience to online buyers and finally move beyond discounts. 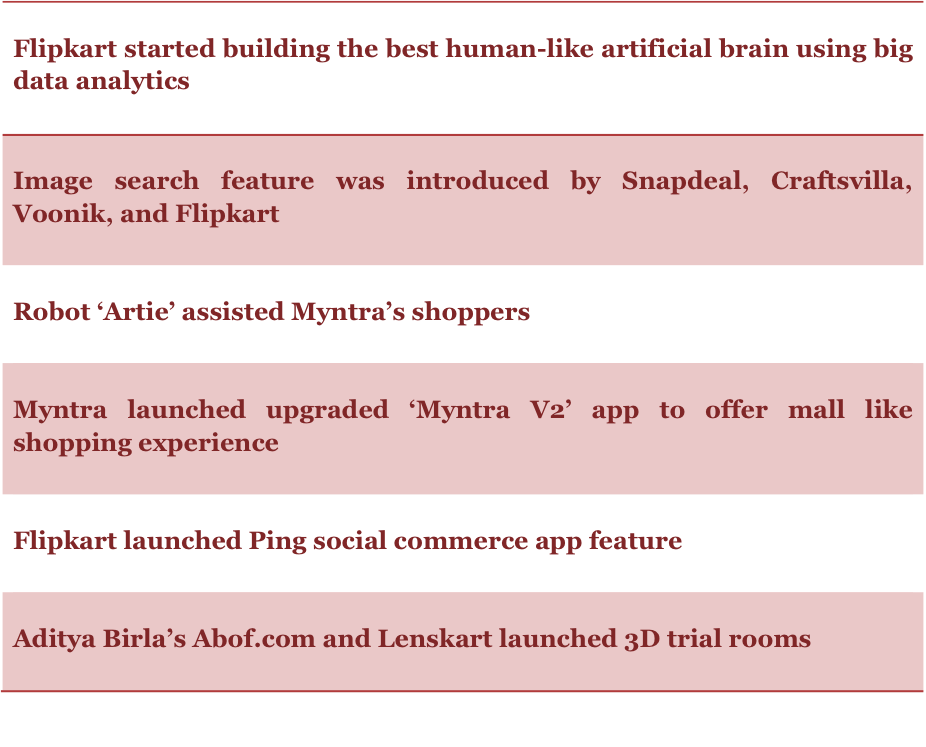 Industry experts feel that ‘Click-and-Mortar’ will rule in 2016. It simply means infusing the best of high-tech online world and trustworthy offline world to create a new & improved retail space for buyers. Organizations with strong online, offline and mobile presence will lead the retail race as opposed to the ones with strong presence on only one selling platform.

Big players have already taken steps to spread its omni-presence but in the new year we’ll hopefully see hybrid commerce on a large scale.

Will augmented reality touch screens, integrated purchase history, thousands of drop points, magic mirrors and interactive & virtual fitting rooms become a reality like it is in the West? Time will reveal that. This is one trend we NEED to see in 2016 because it will lead to unbelievable ecommerce growth. There are 800 million non-English speaking literate Indians in the country. IOS had earlier reported that ecommerce sites & support services in local languages is crucial for etail industry’s growth.

In fact it is surprising that in spite of several announcements, not many etailers except Snapdeal and Shopclues have launched regional sites so far. We hope that in 2016, etailers fulfil their promise and reach out to millions of non-English speaking Indians. “2016 would be a year of consolidation. We can’t expect 10 players in every space and since grocery in the hyperlocal market is a bigger space, probably 5 will survive, but consolidation will happen.”

And we agree with him. The filtration process has already started with many start-ups shutting shops or getting merged with ecommerce biggies.

“The hyperlocal market will be filtered on the quality of customer value. Better value addition will lead to better chances of survival.” Advertising revenue forms a very important part of the Internet industry. And if all goes as planned, then ad network of online marketplaces will not only become one of the biggest sources of revenue but will also help etailers to achieve profitability in 2016.

Indian players want to replicate Alibaba, which has the largest share of mobile internet ad revenues in China. More than half of the Chinese ecommerce leader’s revenue comes from its advertising business. And Flipkart, Snapdeal, Amazon want to be in the same position by pressing paid ads. 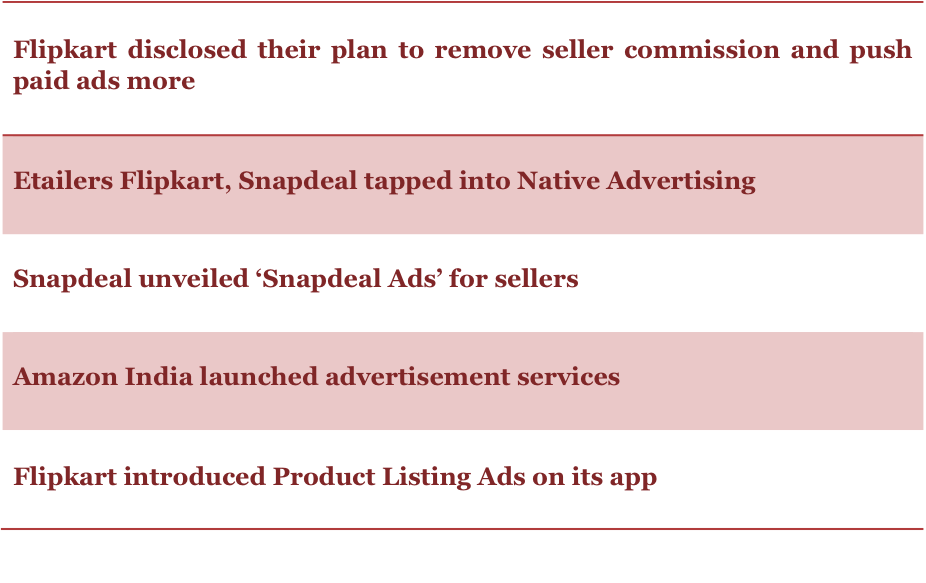 Agreed, digital wallets have been around for few years. And debit/credit card are way too common these days. But those familiar with the Indian market would agree that the success of digital wallets has been limited to selective urban/semi-urban cities. And that cash-on-delivery is still a necessary evil as it accounts to 60% of online transactions. In fact, inclination towards COD and low usage of credit & debit cards is said to be one of the reasons why India lags behind in ecommerce despite of high number of Internet users.

Although, as ‘Digital India’ initiative is gaining momentum, etailers along with government and financial institutes’/banks’ assistance are trying their best to make India a ‘cashless economy’ in 2016. Many innovative ideas have been set in motion that aims at encouraging people to opt for cashless mode of payment. 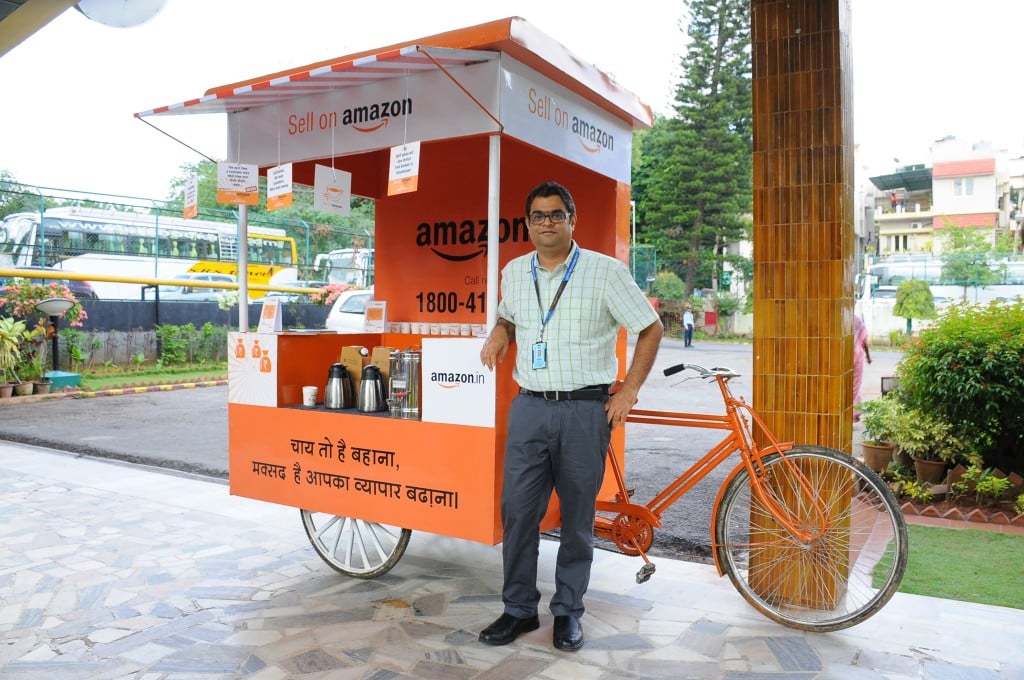 This last prediction comes from none other than the ecommerce leader, Amazon India.

“The year 2016 will be a defining year for ecommerce in India with regards to SMEs. We foresee thousands of them getting online to leverage the growth of India’s flourishing digital economy. Considering that there are a vast number of entrepreneurial SMEs who have never sold online – but have great product selection and are motivated to grow – we will see thousands adopting and adapting to benefit from the digital economy,” revealed Mr. Rohit Kulkarni, Senior Manager – New Initiatives at Amazon India while speaking to IndianOnlineSeller.

He added, “We have come across millions of Indian SMEs who are very entrepreneurial and have a hunger to grow but do not have the necessary skill-sets to manage an online business. There is a lot of work going on in this space at Amazon.in including developing education programs like Seller University and capability building initiatives like Amazon Service Provider Network (SPN) and Amazon Trained Ecommerce Specialists (ATES).” We would like to conclude this article by sharing Grofer co-founder Albinder Dhindsa’s very astute observations about the current ecommerce ecosystem and things that need to change in 2016. Dhindsa shared with IOS,

“The biggest barriers to the ecosystem are:

He added, “The dice is loaded in favour of bigger companies right now, whether it is the regulatory uncertainty or onerous paperwork related to everything from companies’ filings to employment. A lot of these barriers need to be eliminated by adopting technology rapidly and showing intent that new companies are welcome in this ecosystem.”

We hope that all the barriers mentioned above gets eradicated and small & big ecommerce players continue to strengthen India’s economy in 2016.