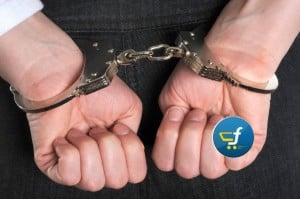 Fraud buyers, beware! Because ecommerce giants are all set to take serious action against those who misuse marketplace’s easy return & refund policies.

Hyderabad based Atul Sharma and Naveen Kumar were arrested by the police for duping Flipkart recently.

As per the etailer’s complaint, Atul Sharma ordered an Apple iPhone 6 worth Rs. 51,590 from the portal in the name of Naveen Kumar. After the order was delivered, the duo claimed that instead of an iPhone, they received paper and rubber. As per the return policy, Flipkart promptly refunded the money.

“In good faith, we refunded the entire amount to him,” said Flipkart in its statement.

As in previous cases, customers have received bizarre things like coconut and Vim bar, so rubber & paper in place of an iPhone seemed plausible too until Flipkart decided to investigate further.

In order to find the missing Apple phone, the ecommerce leader started internal investigation, which revealed that the phone is active somewhere in Hyderabad. Then following an official complaint by Flipkart, the police tracked the phone using its IMEI number, which led them to Sharma. Once the phone was found in Sharma’s possession, the duo were arrested for cheating the marketplace.

Flipkart released a statement after the arrest, which stated, “The present case is case in a point to show that several customers are taking advantage of the return and refund policy of e-commerce companies to indulge in theft and cheating.”

In October this year, another Hyderabad resident, Veera Swamy cheated Flipkart of Rs. 20 Lakhs by replacing original products with fake goods while returning. No wonder the ecommerce leader is ready to take strict action against fraud buyers.

We hope that marketplaces’ adopt strict corrective measures to weed out fraud sellers and buyers. Meanwhile, here’s how online sellers can protect yourself from getting duped.

Previous Article Snapdeal to triple seller base in 12 months

Next Article Just produce a consumer focused product, we will do the rest – Snapdeal tells budding entrepreneurs