Snapdeal announced its Diwali Bumper sale last month, following which Flipkart announced its Big Billion Day on October 6th. Amidst heavy advertising and marketing in the past ten days, Flipkart mentioned how it would be a never-seen-before affair with the intention of hitting 1 billion sales in a day!

Yesterday was the much-speculated Big Billion Day. What really happened? Are the sellers happy? Did Flipkart achieve targets? Did Flipkart set new milestones? More importantly, are consumers happy? Has history been written in the ecommerce sales scenario, which was supposedly meant to happen?

How did Flipkart raise expectations?

A special email was sent out to customers on October 4th, with the subject: “Special message from Sachin and Binny”. 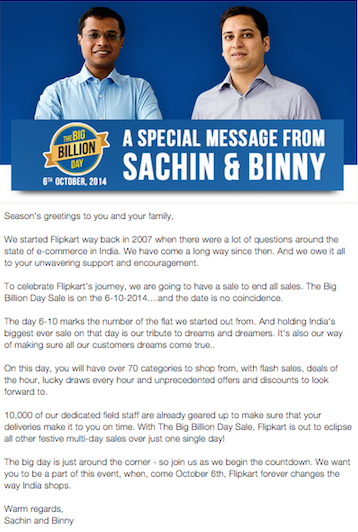 It is not clear if Flipkart achieved its target, but by 2 pm most of the deals stopped getting processed. Around the same time, seller accounts of third party vendors were put as pending, meaning further orders would not be taken for the day and items would have the ‘out of stock’ status.

Apparently, Flipkart received its maximum processing limit – 3,00,000 orders in the first six hours of the sale – the maximum number of orders that can be processed by its enormous team. Taking on orders beyond that would mean dispatching deliveries tomorrow, which would lead to complaints of delayed deliveries from consumers.

By evening, Flipkart stopped sales with the following message:

How did consumers react to the Big Billion Day?

‘Biggest sale ever’ surely kept consumers waiting for the big day, with promises of never-seen-before discounts and offers across almost 70 product categories. Multiple items were offered at Re 1 in addition to discounts like 30% off on smartphones, laptops from Rs 15,000, 50% off on perfumes and so on.

Flipkart has been receiving a lot of flak from consumers for failing to provide the promised shopping experience and increasing the selling price before the sale started.

Also, consumers had to face the ‘internal error’ message, which were apparently due to increased load on the site. Many were not getting confirmations of their orders or could not view items added to their carts. Social networking sites like Facebook and Twitter were flooded with messages from angry and annoyed consumers expressing their irritation and dissatisfaction.

Tweets from a few consumers: 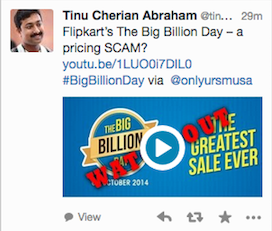 What should Flipkart have done?

The hype around the whole event called for better preparation from Flipkart in terms of order processing and site maintenance. Earlier flash sales have led to crashing of the site so backup for such a situation was ideally required.

At a time when competing portals like Snapdeal and Amazon have ongoing sales with better deals throughout the day, this was not expected of Flipkart. Add to that the fact that consumers themselves were complaining about deals going out of stock as soon as they went live and orders disappearing from carts, Flipkart really seems to have put their credibility in jeopardy.

However, Flipkart will probably bounce back to answer all the skepticism floating around since yesterday. How the leading online portal does it is what we have to wait for!