Home  »  In The News  »  High-value shoppers prefer Flipkart over Amazon; but would Bezos win eventually? 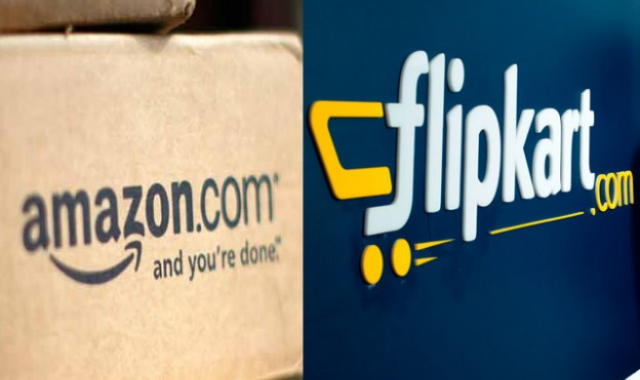 Do you remember Flipkart’s co-founder Binny Bansal’s indirect jab at Amazon where he said, “We did not sell ‘churan’, ‘hing’…. We sold products…such as smartphones, LED and apparel’’? What Bansal had implied was that they sell big-ticket items, while its rival is busy selling groceries.

Well, he isn’t completely wrong. Because according to reports, the percentage of shoppers that place high-value orders frequent Flipkart more than Amazon.

RedSeer Consulting firm recently compared purchasing pattern of buyers across 5 shopping portals – Flipkart, Amazon, Snapdeal, Jabong and Myntra. This was done to determine the percentage of biggest spenders (above Rs. 5000) on each of these platforms between January and March 2017.

The Bansals-founded company ranked number 1 out of the 5 ecommerce platforms in terms of high average order-value (AOV). Below is the percentage breakup of buyers that purchased items worth more than Rs. 5000 in quarter 1 (January to March) of 2017 and quarter 4 (October to December) of 2016:

“High AOVs (average order value) are validation of investing best of customer on e-tailing portals. Going forward it should be a big lever for the growth of e-tailing industry,” asserted CEO of RedSeer, Anil Kumar.

But would Amazon be the one that would lead the ecommerce industry?

While Flipkart has a large number of big spenders, Amazon wins on the volume of transactions front.

In March 2017, Amazon India grabbed a higher market share compared to Flipkart in terms of volume of transactions. While Amazon’s share was 44.6%, home-grown etailer Flipkart stood at 35.7%, as per KalaGato Pte research report. The research firm reached to this conclusion after comparing data of more than 60 cities.

Industry watchers believe that Amazon is focusing on building a long-lasting business. The US-based ecommerce leader is doing that by investing heavily in India’s ecommerce infrastructure and introducing tried-and-tested strategies like Prime. And that’s why it might become the leader in the near future.

Reiterating the above sentiment, Sandeep Murthy from Lightbox Ventures stated,

“Amazon has done a great job in India so far—they’ve adapted to the local market very well. Some of their solutions from there (in the US), they are customizing those for what makes sense here. And they’re leveraging their great knowledge and capital.”

Flipkart is the current leader but Amazon managed to close the gap very swiftly. The American ecommerce giant’s gross sales have only been increasing with each year. While Amazon has deep-pockets and great in-house products, Flipkart has the backing of strong investors and a host of companies (Myntra, Jabong, Ekart, eBay and possibly Snapdeal) under its umbrella.

So whose battery life is long-lasting? Let’s wait and see.