Amazon sale extended, but are its discount genuine? With the close of the Great Indian Sale, Flipkart’s Big 10 Sale began. But, it appears that the discount prices on Amazon have not come down just yet. The US-based etailer flashed discounts up to 80% during its 4-day sale last week and is still providing aggressive discounts on smartphones and televisions.

Three industry executives claim that the major discounts are being offered on Apple iPhones and Samsung smartphones beyond the sale period. This shows that the online marketplace doesn’t want its rival to get ahead of it during its ongoing sale.

“Amazon will continue such aggressive pricing till May 18 (when Flipkart’s ‘Big 10’ sale ends) on most of the popular smartphone and television brands. It is offering such price even for models which are currently sold out, like some of the online exclusives of Samsung,” one of the executives stated.

It appears that Amazon has offering iPhones at a much lower price now than it did during its sale period last week. For example, during the Great Indian Sale from May 11th-14th May, iPhone 5S (16GB) were sold for Rs.15,999 but this price dropped even further to Ra.15,499 after the sale ended. The latter price is being offered on Flipkart for the same product during its current sale.

Over at camp Flipkart, according to the company spokesperson, the sale is going so well that top products are going out-of-stock.

In response to the development at Amazon, the Flipkart spokesperson said, “If the competition continues with its discounted pricing even after its sale, it reflects they were not prepared for a sale of this scale from us and also to liquidate stock.”

The person further added that Flipkart always puts up the old selling prices once a sale ends.

Amazon India’s category management director, Arun Srinivasan mentioned that the marketplace has not extended its Great Indian Sale and no sales-related messages are present on its platform.

Prices are now completely within seller control he said adding, “Since multiple sellers are offering products, price change would happen and we just limit ourselves to offer value to them, marketing and logistic support. The sellers compete amongst themselves to decide the price.”

In spite of denying that the marketplace is still on sale, Srinivasan stated that there would be a special sale for Amazon Prime subscribers. At the moment, it is only for the iPhone 7. More products will soon be added to this sale.

However, Amazon is still offering discounts on Samsung and Motorola smartphones, believe industry executives. A chief of an online electronics brand said, “For exclusive models, Amazon is trying to ensure pricing parity with a similar specification model as that on offer on Flipkart.”

If Amazon does extend its sale it won’t be the first time. During the Diwali festive season in 2016, Flipkart and Amazon both had more than one round of discount sales.

Aggression from both competitors

Amazon is doing its best to take Flipkart’s top spot in Indian ecommerce and offering low-priced goods during Flipkart’s sale could foil the latter’s sales results. But Tarun Pathak, the associate director at Counterpoint research, a Hong Kong-based market tracker, reveals that both have been fairly aggressive recently. The two are looking to capture higher market share.

“Brands have multi-channel strategy which leaves both these players to compete by attracting flagships on their platforms. Snapdeal’s decline also led them to lure new users through discounts and flash sales,” Pathak mentioned.

Compared to last year the smartphone sales for:

Amazon refuted this information, however. The etailer revealed that it received 7 times more sales for smartphones across various brands during the first day of its sales event. In the television category, Amazon has a 24-fold spike in sales. Flipkart, on the other hand, had a 1.5x rise in the sale of TV sets during its first day of its sale.

Amazon refuted this information, however. The etailer revealed that it received 7 times more sales for smartphones across various brands during the first day of its sales event. In the television category, Amazon has a 24-fold spike in sales. Flipkart, on the other hand, had a 1.5x rise in the sale of TV sets during its first day of its sale.

Not all are happy with the marketplace sales

Pranjal Kumar Tiwari posted on twitter that Amazon is increasing prices beyond the normal limit. 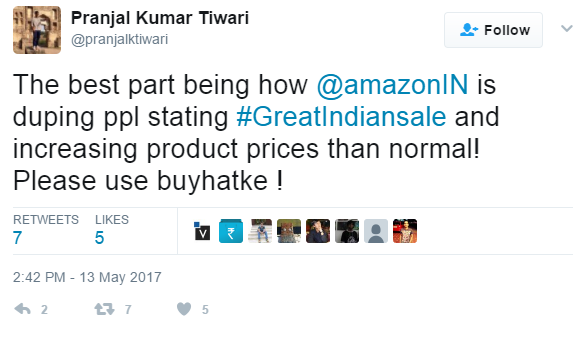 Cases of fake discounts were uncovered at Flipkart back in 2015, where online sellers would list products at a price than the MRP and claim to offer discounts by presenting the actual MRP as the discount price. Based on this tweet by Pranjal Kumar, could Amazon sellers be indulging in the same to offer low discounts?