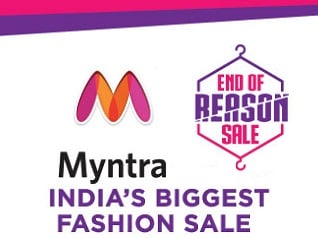 The ‘End of Reason’ sale has ended, and the results are out. While Myntra (and Jabong) CEO Ananth Narayanan is upbeat about the results, we hear that they have not been able to meet their own targets. According to insiders, Myntra did sales worth Rs. 350 crores, and Jabong raked in Rs. 100 crores. Myntra has said that it has witnessed a 160% increase in its revenue, with men’s casuals topping the popularity chart (followed by sportswear and women’s ethnic attire).

Narayanan maintains that all targets have been met, and there is no shortfall. He says,

“I don’t think we fell short. Although internally I always push the teams to do more, but if you look at our expectations as to where we got to, it was essentially Rs8 crore over what we originally expected.”

Kala Gato, research and analytics firm, observes that the ecommerce industry is lagging behind by 15 to 20% of its average figure. Myntra also observed a slip in its growth and sales after the demonetisation.

The company is looking at achieving a GMV of Rs. $ 1 billion in 2017. It is also hopes to earn profits by 2018 (however, one wonders if this is over ambitious considering that the company saw a drop in its growth in 2016 ) Narayanan said,

“We crossed a billion dollar run rate this year, we want to cross a $2 billion run rate by 2018 March. We want to be not just unit economic positive but overall profitability. We want to exit the next year with EBIDTA zero January-March 2018.”

Towards this, the company plans to ramp up its private labels, curb discounts, focus on customer engagement, and cutting supply chain costs.

2017 has begun on a hopeful note for Myntra. As the year progresses we will find out how the company’s fortunes will grow.