A look at how Indian online retail fared this festive season; what lies ahead? 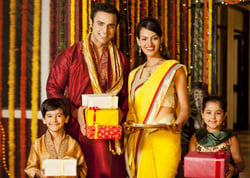 This year’s festive sale in ecommerce has some interesting observations. Most of the online marketplaces have outdone their expectations. Flipkart topped the charts with a sale of 15.5 million units. US ecommerce giant Amazon came a close second with 15 million units. Snapdeal sold 11 million units.

“It is only a matter of time that the internet penetration will improve in these cities and we are going to be there with stocked warehouses to deliver our items on the shortest time possible.”

The company claimed that 80% of its orders came from small cities and towns. Amazon says 70% of its sale came from non-metros and Flipkart pegs that number at 60%.

An analyst from RedSeer Consulting points out that FMCG is the star this season,

“This year consumables and large appliances have attracted a lot of orders. This is a new trend for Indian ecommerce to concentrate on FMCG products. And, while FMCG earn a lower commission for etailers at 7-10%, it is still higher than selling electronics.”

Observers also feel that things might be finally looking up for Indian ecommerce. RedSeer had earlier predicted a combined GMV of $1.5-1.7 billion and has modified this figure to $1.7-1.9 billion.

Discounts still appear to be ruling the roost. Not everyone is in favour of this. Mohandas Pai, Chairman, Manipal Global Education Services and venture capital firm Aarin Capital, feels,

“Many startups are doing wrong accounting by showing actual discounts as business or marketing expense when the money is being used for subsidising the sales of goods either directly or indirectly. Some of them are even paying merchants to come on their portals to subsidise the discount.”

‘We’ve not had enough’, more sale coming up

Whether it is a matter of wanting to replicate their success or an attempt to do better than their competition, all marketplaces are planning phase 2 of their sale later this month. We will hold the second round of our analysis after that session.