While ecommerce biggies don’t leave a chance to paint a rosy picture of their businesses and blurt out grand plans & inflated figures; industry watchers and participants are completely aware of the real picture. Sample: AskMe debacle.

So quite expectedly, etailers are doing what they can to slow down cash burn – slimming down workforce, shutting down non-performing units, increasing seller rates/charges, reducing discounts, and strengthening alternate revenue channels.

Besides the abovementioned ones, Snapdeal has adopted another strategy to save money. It is – reject claims raised by sellers in spite of giving repeated assurances.

Non-payment of seller claims by Snapdeal 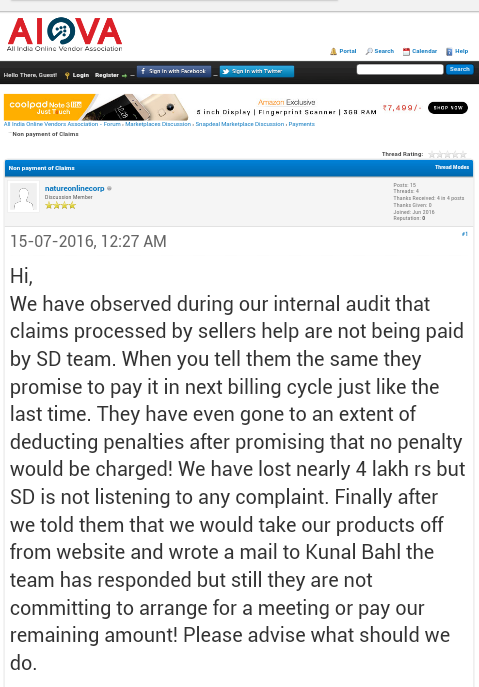 According to vendors, Snapdeal is not approving claims raised by them and is levying unnecessary heavy penalties. And talking to the seller help centre staff members and account managers hasn’t helped even a bit. Few sellers feel that the marketplace started doing this particularly from the beginning of this financial year.

“I visited their office to meet their fmcg category head. He assured us of reconciliation but nothing has happened in last 10 days. Moreover SD seller help team keep on refusing our claim and today we were told we should adjust if some of the claims are not been granted. We should also bear some losses as it is business for both the parties. I have marked all my products OOS as they are charging shipping fee for RTO also,” wrote seller natureonlinecorp.

Indian Online Seller spoke to Surekha Kulkarni of Sakura Tradelinks, who has lost approximately Rs. 30- 40 lakh as Snapdeal debited their payment as returns and did not return the (returned goods) stock. No amount of meeting and coaxing, through emails, calls and in person, elicited any (useful) response from Snapdeal.

“We started dealing with Snapdeal in 2014 under the name of sakura tradelinks under the dropship model. We did business of about 5 crores of different categories like mobiles, beauty products, televisions, refrigerators, Acs, kitchen appliances,” says Kulkarni.

Kulkarni shared with IOS the major three issues she has faced this year related to claims while selling on Snapdeal:

IOS has reviewed several emails exchanged between Snapdeal and Kulkarni for each separate issue, be it returned goods not received, goods lost in Snapdeal warehouses, delay in reimbursement for lost goods, and unethically rejecting claims. It was also observed that Snapdeal’s seller service executives were in a hurry to close tickets without understanding and resolving the issues.

Kulkarni also wrote an email to Snapdeal’s CEO Kunal Bahl, in which she said,

“Today we feel we have been totally duped by Snapdeal, and we estimate our losses to be in the range of 30- 40 lacs… Kindly let us know what all data you need, or else I are also willing to come to meet you personally at your Gurgaon office. Kunal, I have been ruined and devastated by snapdeal , and you are my last hope.”

The mail to Bahl was sent in February 2016.  You guessed it right – he hasn’t replied.

Snapdeal’s struggle to stay afloat between Amazon and Flipkart

Every ecommerce investor has put heavy iron lock on their wallet and instructed the companies they have poured their money in to cut costs. Snapdeal investors are no different, we believe.

In August, the company shut down Exclusively.com. The etailer lost two major deals in the last 3 months – fashion portal Jabong and logistics firm GoJavas. And it has been struggling for quite a while.

Things were different last year for the etailer. Bahl even declared,

“We have enough capital. In fact, we have used a fraction of the amount that we have raised. We don’t have to raise money now just because it is fashionable.”

A year later, things have drastically changed. Snapdeal went from one of the frontrunners (thanks to Softbank & Alibaba) to a distant third.

Snapdeal raised $21 million last month from Clouse SA, a Luxembourg-registered investor. Some are calling this a fishy investment. Anonymous Unicon Baba, who is a regular commentator of Indian startup ecosystem, tweeted:

Kulkarni, who is reeling under heavy losses (30-40 lakh), is just one of the 3 lakh sellers that are listed on Snapdeal. If Snapdeal pushes similar losses on even 10% of its sellers, the company will end up making/saving Rs. 900-1200 crores!

Due to fund crunch, is Snapdeal trying to save money by rejecting seller claims, losing/keeping their stock, and pressing incorrect shipping charges? From dubious investments to cheating sellers, is this Snapdeal’s way to win the ecommerce race?

The etailer is all set to undergo a brand makeover. Time to undergo ethical makeover as well?