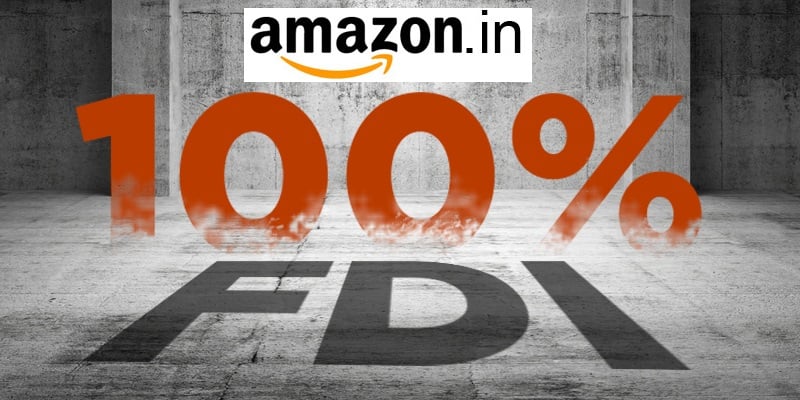 100% FDI in ecommerce has resulted in an ecommerce disruption. The restriction on ecommerce discounts and the 25% sales cap on online marketplace sellers have been criticized and praised. The high rollers (in this case, marketplaces) in online retail haven’t said much about their plans to implement the 100% FDI norms.

Amazon in the Midst of it all

Amazon aims to meet the FDI requirements, but needs time to do so, which is why it appealed to the government and IAMAI for more time. The foreign marketplace wants to put together a process that will enable its sellers to fulfill the new FDI requirements, revealed Amazon Indian’s MD Amit Agarwal in an interview.

Taking Steps to Follow FDI Regulations – Doing it for the sellers

Amit Agarwal spoke about the recent FDI norms declared by the government.

“The Clarity allows us to invest more to make sellers successful. We will put a process in place that we can provide some clarity to our large sellers on how their share is shaping up, so that they can manage their own business on the platform. We have always been compliant and will continue to be complaint,” He said.

The largest seller on Amazon is Cloudtail. It accounts for 40% of sales on the marketplace and is a joint venture set up by Amazon and Infosys co-founder NR Narayana Murthy’s Catamaran ventures.

Other Marketplace Attempts to Meet the New Regulations

Last week we learned about Flipkart’s intent to shrink WS Retail’s share in sales. The process will take time, said the marketplace. This will give other sellers a better opportunity to sell and flourish.

Snapdeal on the other hand said it has no issues because none of its sellers have monopoly.

When asked about their rivalry with Flipkart, Agarwal gave this reply,

“All I can say is if I look at last year, we grew by 250%, which is four times what the industry grew. And we sold in the last quarter of last year, more than what we sold in the entire year. And we continue to see very strong momentum and no slowdown.”

Strangely, Agarwal’s team is motivated by paranoia. He says, “My entire team is paranoid of a very simple fear that customers will only shop on Amazon until the very moment they find  better customer experience somewhere else. And that paranoia keeps us going every single day.”

MD Amit Agarwal also mentioned that the ecommerce giant, Amazon, will keep investing aggressively in India. At the start of this month the marketplace increased its authorized capital by Rs.8,000 crores.

Agarwal was recently promoted to Amazon’s core leadership S-team. It allows him to work closely with the marketplace’s founder Jeff Bezos. He said in the interview, the experience so far is very exciting and humbling. But the important bit is, this is an indication of Amazon’s excitement; about the momentum its franchise in India has gained. That too in such a short span! The marketplace also plans on investing aggressively in the country to transform the way we buy and sell. He added.

Next Article [Infographic] Why ecommerce is the best way to retail!