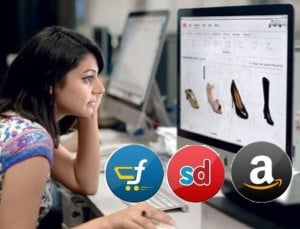 Competition in the Indian ecommerce turf is not one-dimensional. Online marketplaces are trying to create self-sustaining business wherein they are trying to become the leader in every ecommerce vertical. The aim is to keep winning small battles while on the way to the top position.

Here’s how Flipkart is winning in the apps, festive sales and advertising department with Amazon closing in fast and Snapdeal trying its best too.

Flipkart emerges as the winner of Festive Season Sales

A recent survey conducted by a Bengaluru-based Internet Research firm, CaanvasIndia revealed that Flipkart was the preferred choice for most of the online shoppers during the festive sale season. ET reports that 1,500 people were part of the research, with 46% from tier-2 cities, 89% of them were men and 1/3 of the total fell under 30-40 years age group.

Flipkart leads in the app world too

Etailers’ obsession with app-centric strategy is there to see for all. As m-commerce is called the future, all eyes are on which marketplace is going to win in the mobile space.

Again, homegrown company Flipkart leads here. Credit can be given to its focus on the rumoured app-only transition.

However, when it comes to user ratings, all three are neck-to-neck with ratings between 4.1 – 4.2 on Google Play Store. In addition, the number of Amazon app users is increasing steadily so the US based ecommerce giant might overtake Flipkart.

While Paytm, Shopclues, Snapdeal, and eBay do make occasional appearances in the ecommerce race, the fact is for now the top contenders are Flipkart and Amazon.

Amazon is focusing on offering a wide range of products at affordable prices whereas Flipkart is exploring other avenues such as advertising to earn revenue.

This Live Mint report highlights how ‘both the companies have adopted complex corporate structures and used loopholes in the law to deploy a mix of the marketplace and the direct-selling business model.’

The US based etailer learned a hard lesson in China and hence don’t want to leave any chance of capturing the Indian ecommerce market. On the other hand, Flipkart is keen on replicating Alibaba’s success by following the advertising-driven revenue model and raising capital via IPO.

Both the leaders, Flipkart and Amazon are trying different strategies to achieve the same thing – becoming India’s numero uno ecommerce platform. Although, there’s a long road ahead before we find out who ultimately succeeds in reaching that position.