Myntra was one of India’s hugely successful online marketplaces. The site specialised in fashion, and dealt exclusively in apparel. It was having a good run, and in May 2014, leading online marketplace Flipkart acquired the company. Shortly after the takeover, the latter made a revolutionary decision, to shut down the Myntra website, and operate it only from the app.

There was an immediate and strong reaction from the community. Buyers cried foul, other marketplaces smugly assured their customers that they would respect their customers’ choices, and continue to offer both options, and Myntra and Flipkart bravely defended their actions.

The argument for going app only was that about 80% of its traffic, and 70% of its sales were coming from the app. Experts rightly pointed out that while that could be true, it did not mean that the traffic from its website had dropped, or the sales from the website were so low, that they had to shut it down.

The choice did not appear to be a wise one, as Myntra recorded a 10% drop in its sales a week after it shut down its website. Things did not improve, when it announced an ambitious sale, and the app had technical problems. This gave naysayers yet another chance to gang up against the marketplace, and say, “We told you so!”

After all the hullaballoo settled post the website shut down, we decided to see how Myntra is faring. Users seem to be sitting on the fence as far as a clear verdict is concerned. However, according to reviews on Google, the app has garnered a four-star rating in toto. Good news? Maybe not. Common problems that reviewers have raised include poor connectivity, the app hanging, shopping bag page not reflecting, issues post a recent app update, problems with returns and refunds, and so on.

Other problems include high COD charges, problems with return pickup, no service for Windows 10, among others. Many users are ruing the high delivery charges.

Myntra realises that things are precarious, so it is ensuring that it responds to complaints, and acknowledges compliments. To a user commenting about not being able to locate the size, Myntra has got back with, “scroll over the ‘i’ icon in the product image, to find the size the model is wearing.” Another buyer Thomson Mathew feels the website was better. He says, “The back button just drives you nuts. It goes back to first page and the filters need to be reapplied again. During address change the back button takes you back to the product selection page instead of the bag page.” One buyer has lauded the move to go mobile only. Swati Sucharita says, “Smart move myntra… Well played going mobile only Just one thing, wish there was some bookmark button, where I cud bookmark till the location or my current search page,” A thrilled Myntra has replied stating that they will look at bookmark options. Not so happy with app-only

Interestingly, quite a few of the reviewers want the website reopened. Nabanita Roy has spoken out very strongly about the move to app only. In a harsh tirade, Roy says, “Myntra is boasting personalised service. Well I do not understand why a laptop or a personal computer is not personal enough to provide personal service. No matter how much you improve upon the app, the best personalised experience will have to be on d desktop and not on our phones. Myntra has looked at its benefit and sugar coating it under “personalisation “. Truly unfair!” A hapless Myntra replies with, “Sorry to know this, we’ll surely pass along your feedback to our team.” 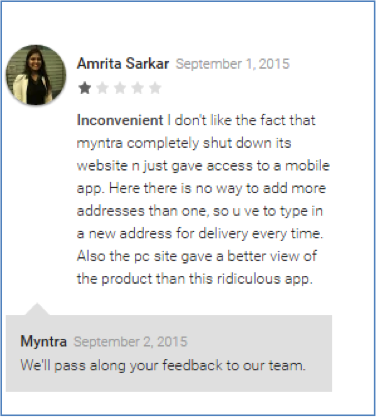 Many reviewers on mouthshut.com are having problems with the return process. Ganesh Naidu has this to say, “I’ve been a customer of Myntra ever since it started. The company’s values started deteriorating ever since it was bought by Flipkart. A few days ago, I made a very big purchase and then I had to return half of those items. It has been ten days and no agent has come to collect it. I am moving to Jabong for dress shopping.”

Another shopper said, “I wanted to return an item bought from Myntra and it is a horrifying experience to do so. First they do not offer pick up facility which they conveniently don’t tell when you order. An email from their customer service desk promises pick up facility at my pin code but when the time comes to return they just tell me to self ship. The cheapest cities service available cost me Rs.145 and Myntra are willing to pay only Rs.100. Even after 2 weeks of them having received the return (confirmed via email) I still haven’t got any cash back. Customer desk just asked me to wait for 5 days before they can even reply to me! Absolutely appalling service. This was my first purchase from Myntra and it certainly will be the last.” 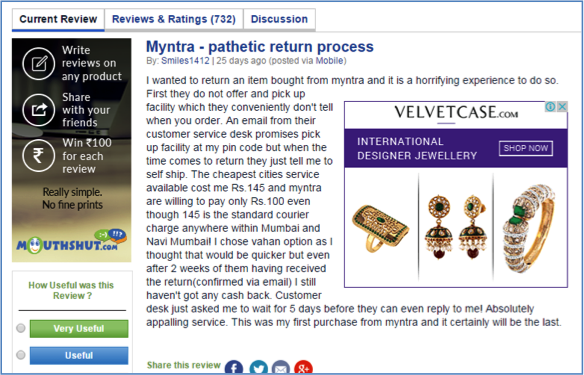 It is definitely no bed of roses for Myntra. Its troubles are far from over. It is clear that the company is trying its best to continue on the unbeaten path. As of now, it looks like the scales are tipped against the choice to shut down the website. At this point, if Myntra gives up and revives the website, it will only create problems for its image. It is as good as admitting defeat in the race.

Ironically, it appears as though the customers will only be happy if the website is brought back. Myntra appears to be in the unenviable situation of being caught between the devil and the deep sea. The industry will have to wait for a few more months before measuring Myntra’s success, or the unfortunate lack of it.

What do the sellers on Myntra have to say about the situation? Have you faced any problems? Where do your sales and profits stand after the app-only move? Have things improved, or remain the same, or gotten worse? Let us know, we await your response!

Previous Article Factors contributing to the cost of Online Retail