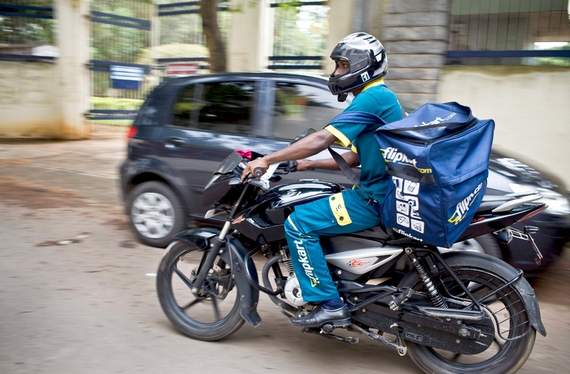 In an attempt to take on Amazon’s ‘Kirana Now’ initiative, Flipkart is in talks with local merchants to come up with a similar function. Economic Times says in this report that Flipkart is looking at tie-up with Roadrunnr, a logistics start-up, to launch a hyper-local business, ‘f Qck’. The unconfirmed report also says that the ecommerce major is also in discussions with Parcelled, an online courier service, to combat the deliveries during the Diwali sales rush.

Several small scale local delivery services are popping up, with promises of delivery in hours. These small businesses could pose a threat to established players in the ecommerce sector. However, the big guns are looking at tie-ups and buy outs with their competitors. Flipkart appears to be in a frame of mind to practically wipe out its competition. At the same time, it is trying to beat its major contender, Amazon from all possible sides.

Flipkart’s kirana dreams come close on the heels of Amazon’s ‘Kirana Now’. Last year, Amazon launched a project with local stores. In ‘Kirana Now’, the kirana stores display their products on Amazon, and when customers place an order, the delivery is taken care of by either Amazon; the kirana stores themselves, or third party logistics firms.

IOS had reported that after launching operations in Bangalore, Amazon extended ‘Kirana Now’ to 28 more cities at about 500 stores.

The scope of hyper local delivery

According to Manish Saigal, Mangaing Director of Alvarez & Marshal, a corporate management consulting firm, every city will have specialised local companies that take care of intra city logistics. “Globally, DHL exited local delivery because they found it hard to do it efficiently and profitably,” he says.

Experts are of the opinion that hyper local stores and delivery holds great opportunity for ecommerce. Local delivery and last mile delivery is crucial to ensure on time delivery. Major logistics companies face roadblocks when it comes to local delivery. The best options that ecommerce companies have are to tie-up with local courier companies and start ups in the hyper local field.

Local logistics is a growing field, but it is also fraught with challenges. Mutually beneficial partnerships look like a workable solution. Whether Flipkart will launch f Qck, and whether it will work in the long run remains to be seen.

Next Article Flipkart raises another $700 million funds, raising the heat in the ecommerce race