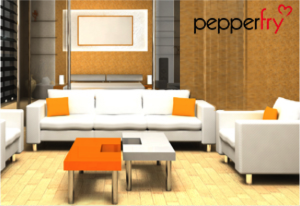 After top fashion etailer Myntra’s announcement to become profitable by 2016-end (after its strategic transition to app-only on May 15th), it’s furniture etailer Pepperfry that has announced intentions to turn profitable in the coming two years.

Ambareesh Murty, CEO and founder of Pepperfry, is confident that going by the sales and traffic currently, the transaction volumes would only go higher such that the company would be able to break even within the estimated time.

“Net of all direct costs and expenses, I make money today. For every rupee that is bought, I make at least four to five paise at the net level. At the gross level, I have a margin structure of 35-40 per cent,” Murty told Business Standard.

What does Pepperfry need to take care of?

According to Murty, Pepperfry could achieve profitability much earlier if the current financial architecture is maintained or improved a bit. But right now they are focusing on growth and targeting profitability in the next two years.

Currently, Pepperfry has its presence in 200 Indian cities and towns. Future expansion plans include expanding presence to around 400 cities and towns including the tier 2 and 3 ones. The furniture etailer is looking to raise $70-100 million in the coming months.

“Our investments will go into building a stronger supply chain. Today we are in 200 towns, we expect to be in around 400 towns by March 2016,” Murty said. “We also plan to invest heavily in technology and our headcount in those teams will go up significantly. We will invest in marketing through television and open more studios,” he added.

Also part of the expansion plan is the opening of around 20 showrooms in 11 cities by 2016. These showrooms don’t sell any products. It’s more like experience zones for customers to get the touch and feel of products sold on the Pepperfry portal.

Next Article Amazon app is second most popular in India; yet Tiger Global cuts stake in Amazon by 67%, why?