Home  »  Featured • Flipkart • In The News • Marketplace Watch  »  Flipkart to go app-only in a year, following in Myntra’s footsteps 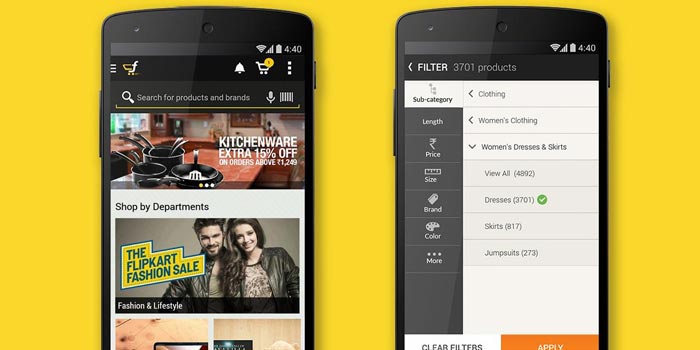 After Myntra’s announcement about the app-only resolution from May 1, it was only a matter of time before Flipkart followed. In a year, India’s homegrown ecommerce giant Flipkart too would be in the app-only format.

“Last year, we had more on the app, but still did our Web and desktop. In the next year or so, we’re going to be only mobile,” said Michael Adnani, vice-president, retail and head of brand alliances, Flipkart. “A year ago, 6% of our traffic was coming from mobile. In less than 18 months, that traffic is 10-fold. That shows the significance of what a mobile phone is doing for the consumers and consequently doing for us,” he said.

Reasons for the shift to app-only Flipkart

Smartphone and internet penetration have been credited as one of the main reasons that online shopping clicked with customers. Accordingly, while Flipkart received only about 6% of customers through mobiles a year ago, it has now multiplied ten-fold with significant traffic contributing to Flipkart sales.

Since the rate of transactions grew proportionally to the traffic to the app, an app-only strategy makes more sense according to the Flipkart team.

Also, about two-third of Flipkart’s transactions are from customers in the small cities and towns. They find it easier to access internet through their smartphones (everyone has them as they are so much more affordable now) as most of them don’t have desktops or laptops and broadband internet.

Flipkart’s desktop website also has been promoting the app the past few months, including exclusive offers and extra discounts. So, a smart move?

Based on the reasons above, yes it seems like a good move. If sales from mobile app are proportional to traffic, then it makes sense to invest technology and resources into making the most of it.

But the question still remains – If etailers go app-only, don’t they run the risk of losing out on the older non-tech savvy customers?

Next Article No dearth of delivery partners for Alibaba in India