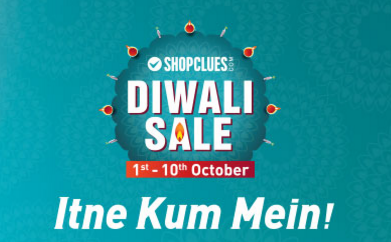 Indian ecommerce leaders Flipkart, Amazon and Snapdeal are ready with fresh pile of cash to spend on marketing campaigns during the peak shopping season.

But Gurgaon-based Shopclues has slashed its marketing budget for Diwali sales (from October 1st to October 10th) unlike the big ecommerce players.  The etailer’s aim is to limit cash burn and prioritize profits.

To keep tight hold on its wallet

“Our digital marketing and television commercials (that go live on Monday) are all focused to tell the consumers that they can get a lot more (products) in a lot less (money spent),” Aggarwal said.

Will invest in sellers

Hence, the etailer has reserved 15-20% of the Diwali marketing campaign budget for seller initiatives.

“Our success lies in (the) merchants’ success. That’s why they remain a very important part of our campaign,” asserted Aggarwal.

Some of its seller initiatives for the shopping extravaganza 2016 are:

The only Indian ecommerce players to be on the right track?

Even though Shopclues doesn’t feature in the top 3 list, the company is quite close to dethroning Snapdeal. When the ecommerce leaders focused on metropolitan cities, Shopclues expanded its business in tier 2 & 3 cities, which is why the company has strong hold in non-metro cities. And it helped the company to keep its losses low compared to other firms too.

With the decision to keep an eye on cash burn rate and focus on profitability, will it be wrong to assume that maybe Shopclues in the only online marketplace that is on the right track in terms of business growth?