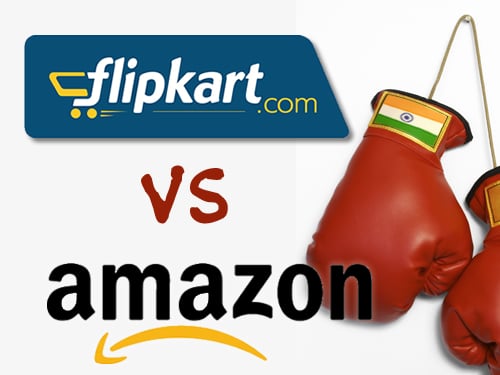 The gross sales numbers of the ecommerce biggies Flipkart and Amazon for the month of July shocked everyone as the American etailer was ahead of the Indian etailer for the first time (in terms of gross sales).

It would have been brushed off as a one-time thing, only if for the second time in a row Amazon wasn’t ahead of Flipkart.

Reports have revealed that Flipkart’s gross sales (excluding Myntra, Jabong) for the month of August was approximately Rs. 2,100 crore. Amazon’s number is higher than the Indian etailer.

The American ecommerce giant managed to increase its sales due to the 3-day Great Indian Sale held in August. Flipkart’s sales too picked up after a brief lull but it wasn’t enough to outpace Amazon.

If being beaten by rival wasn’t enough, here is some more bad news.

Flipkart, which is on a cost-cutting spree, was in the news in July for firing around 400-700 of its employees from customer support and operations team due to financial trouble.

Word is out that the etailer is on the verge of firing 800 more as the company’s growth has slowed down drastically.

But sources close to the development have shared that people are indeed being laid-off and it isn’t a mere speculation.

“These employees (who are being sacked) were hired at salaries that were 30-40 per cent higher than the industry average, because Flipkart was growing and expanding rapidly at that time. There has been a marked slowdown in GMV growth, which hovers between $4 billion and $4.5 billion, a far cry from the $10 billion GMV projection; there are also no high expectations of a blockbuster Big Billion Sale this October. So, Flipkart is going ahead with the firing.”

The Bansals-led firm is full of contradictions. One on hand, the firm is letting go of mid and high level employees from technology and corporate team. On the other hand, it is looking to hire 10,000 temporary employees to meet festive sales demand.

The new workforce’s main task would be to assist in logistics and delivery.

“With the festive season coming in, we are confident that Big Billion Days (sale) will be bigger and better than before this year. In addition to having the new capability of alternate delivery model, we are looking at hiring more than 10,000 temporary staff in logistics and last mile across the country,” said Seth.

What will happen during the festive season?

Amazon-Flipkart reminds us of the hare and the tortoise story. Flipkart is the hare, which had a considerable lead in the ecommerce industry. But in the last 3 years, Amazon slowly and steadily formed its India business and climbed up the ecommerce ladder.

While Flipkart refuses to accept that the company is slimming down its workforce, it is clear that the marketplace is trying to find a balance between reducing expenses and having a team in place to execute Big Billion sale effieciently.

Although, one thing that is guaranteed – online shoppers are going to be wooed incessantly by Flipkart and Amazon during the upcoming festive season sales period.

As we can see, Amazon’s marketing budget is way more than Flipkart’s. Who will win? Amazon with deep pockets or Flipkart with Myntra and Jabong?