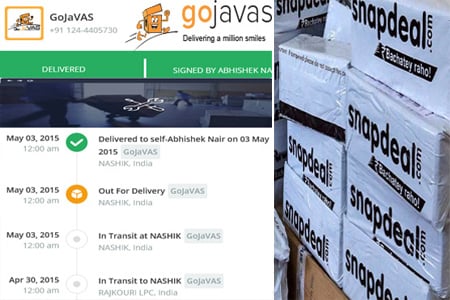 It looks like the Snapdeal GoJavas takeover will not take place. Money was reportedly the bone of contention between the two parties. GoJavas seems to have called it off after finding the terms to be unfavourable. Says a person familiar with the situation,

“There were disagreements over the valuation at which Snapdeal wanted to acquire GoJavas. The logistics company was not happy with the way talks were panning out as some terms and conditions set by the online marketplace player were not agreeable to the founders of the company. They decided to walk out of the deal. Snapdeal wanted to buy out at a price that is much lesser than the present valuation and that is why the deal fell through,” said the source.

The break up has been on unpleasant terms, so much so the logistics company is looking at recovering the stake Snapdeal holds.

“There might be a possible buyout from Snapdeal. However, for now, they remain one of the customers of the company,” said a reliable source requesting anonymity.

GoJavas planned to be exclusive to Snapdeal post the merger, but looks like now these plans will be shelved. In fact, the embittered logistics company is seriously considering moving to other sectors like banking. Said a person familiar with the developments,

“The company is looking at non ecommerce sectors such as banking & financial and telecom. Soon, they would be branching out into other areas as well.”

Is GoJavas burning its bridges? Jabong has given the company notice to end its services as it had increased its rates. With the much awaited deal with Snapdeal falling through and GoJavas wanting to take back the 42% stake the ecommerce company holds, what next? More importantly, what about Snapdeal’s plans to build its dedicated transport system with its company Vulcan? Looks like the company will have to look at other options now.

Previous Article [Seller Interview] “Shopclues is a better marketplace for sellers for product returns!” Here’s why Mamata feels so

Next Article Is Amazon not taking action against brand infringement?