The ecommerce competition is brewing and Snapdeal has chosen to win its seller’s hearts in order to overthrow its competitors. The online marketplace recently revised its seller policies and many sellers are happy with the latest changes. However, some flaws still remain with the way Snapdeal runs things.

To improve seller experience with the platform, Snapdeal introduced the Queries option on its Seller Panel. It serves as a seller support facility that tracks support requests. It is also a knowledge base so sellers can have common queries resolved immediately. Originally Snapdeal sellers could raise queries through emails at sellershelp@snapdeal.com.

Online seller ABC (name withheld on request) said they have disabled this feature and that was a mistake! The seller has been selling kids bloomers and thermals on Snapdeal for about 2 and a half years. His brand receives approximately 150 orders per month.

Seller ABC finds the Snapdeal seller query panel time consuming and a bit inconvenient. He believes limiting sellers to this means of query communication is ineffective.

Snapdeal sent an email to its online sellers in May, requesting them to raise queries only through the Seller Panel. 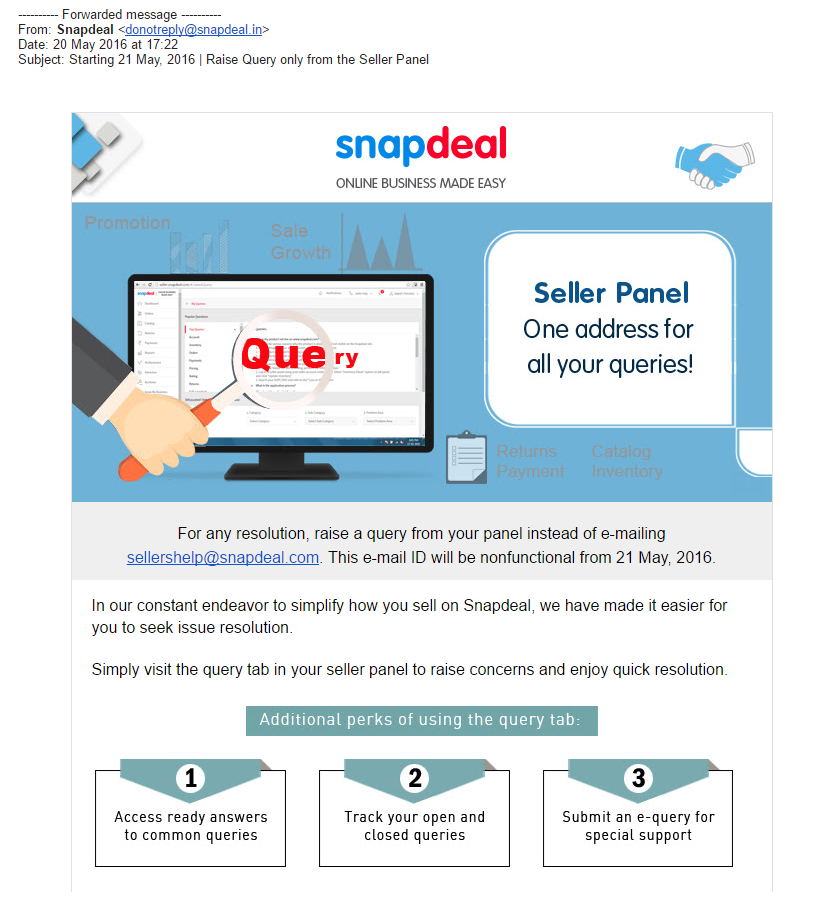 What’s wrong with the Query Panel?

The online entrepreneur ABC informed IOS about the following problems he faces with Snapdeal’s only way of raising queries:

The Snapdeal queries panel isn’t unfriendly as such. It’s a bit more time consuming than it should be ABC informed us.

He said, “In order to raise a new query one has to open a question from the list of questions and in the solutions of that you need to look for the option ‘Not Satisfied Raise a Query’.”

The query panel does not show Snapdeal’s response to queries raised. “We received a notification about ‘return not accepted’ in our email account. When we tried to reply to the email it bounced back. We tried searching for the notification on the query panel but couldn’t find it,” mentioned ABC.

Problem #3 – No other means of raising queries

“You can call up Snapdeal and raise a query but when you need to attach the required files, you must use the panel! Also if you do call Snapdeal to raise a query they will ask you to use the query panel,” ABC said.

Problem #4 – Responses based on priority

When asked how long it takes to acquire a response from Snapdeal, seller ABC stated, “It depends on priority. For example, if the marketplace courier person has not arrived to pick up an order, we receive a quick response.”

Interestingly, when we spoke to another online seller, Vikas Jain, dealing with mobile, laptop and computer accessories, he had a slightly different take on the panel. He claimed to have no issues in handling the panel; however, he feels Snapdeal’s lack of response to queries is the real hassle.

Vikas has been using the query panel since February and has raised queries regarding,

He said, “It takes more than 44 days for a response. Most times the response is ‘we will follow up in 24 hours, 48 hour’ and so on. The response finally provided isn’t very satisfactory.”

According to online seller association ESellerSuraksha, most of the sellers in the association were very happy about the query panel. Sellers can easily work out their queries without having to wait for a response in most cases.

ABC believes Snapdeal looks out for its sellers. “We know Snapdeal is the only marketplace that thinks about its sellers and thrives to make things for us easier. But this decision of Snapdeal is a real setback for us in effectively communicating with them,” ABC said.

Previous Article How to create an online business with less investment

Next Article Sellers ask: Askmebazaar, why is your service below par?