Home  »  In The News • Marketplace Watch  »  Mebelkart to release withheld payments, but not fully? It seemed pretty clear that Mebelkart, the Askme group subsidiary, was unable to pay its sellers. After continuous delays and automated answers that were of no real help online sellers looked to eSellerSuraksha (ESS) for assistance. The online seller group started out with a few sellers but now they have grown by about 1574 online sellers in total.

“I am responsible for the sellers within the group. It is my duty to fight for justice on their behalf,” said Thakur, president and founder of the group, regarding the issues on Mebelkart and Askmebazaar.

According to an ESS member and online seller at Mebelkart, (name withheld on request), the marketplace has been delaying payments since the start. Initially it was one to two week delays and then it gradually grew.

The seller now has an outstanding amount of Rs.6,48,449 overdue for payment. This is a very serious matter to him and rightfully so!

He further adds, “There are six other vendors that I know who collectively are to receive 1.5 crores and above accrued over a period of two months and more. The situation is grim, the founders are having a merry good time having stashed off their loot somewhere and the poor vendors are at the receiving end.”

Another vendor he knows of needs the money desperately to care for his ailing mother. He seller is unable to pay his bills because Mebelkart refuses to release his money, he said to us.

Mebelkart conned sellers into joining them?

According to reports Askme claimed it would invest $20 million in Mebelkart for a 75% stake in the online furniture platform. What happened to the investment money?

The ESS seller says those were exaggerated claims to show buyers and the media Mebelkart is a very serious player and is well funded.

In addition to this, Mebelkart had been engaging in deep discounting by offering the seller products below the actual selling price to meet GMV targets. The marketplace claimed to be covering these discounts from its own pockets, the seller mentioned.

He believes that the founders of Mebelkart have been mismanaging finances and Askme is not willing to make any payments to them until an audit is complete. He also go on to state that all payments made by the buyers were directly sent to Askme accounts (that is Getit Infomedia). This means sellers dues and all other payables for Mebelkart were covered by Askme. Askme is having issues of mismanagement in itself and that is why payments are not being released, the seller further states.

Mebelkart strings together some cash

To make sure online sellers have some evidence of this claim, Thakur requested the marketplace to email the sellers about when they can expect their money. The Mebelkart representative agreed to do so upon provision of the seller’s names.

After following up with Mebelkart on Wednesday, via email, they received a reply that said payment of Rs.50,000 would be released on Friday and the balance amount in the following week.

Below are the emails exchanged between ESS and Mebelkart: 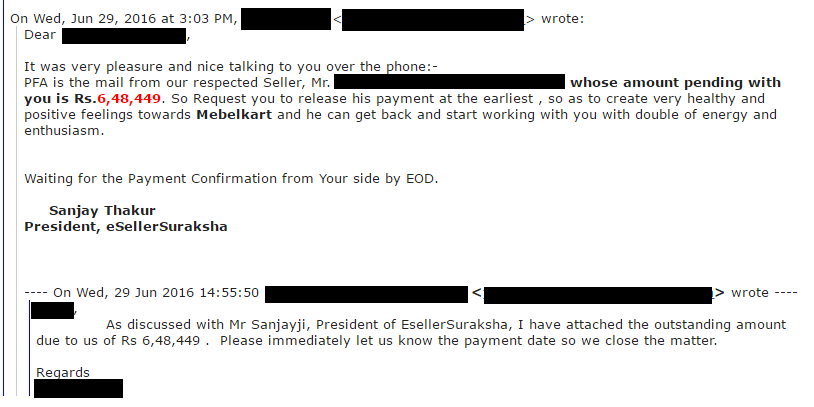 Does every online seller on Mebelkart have to ask for their own money this way? Also, will everyone be paid in full?