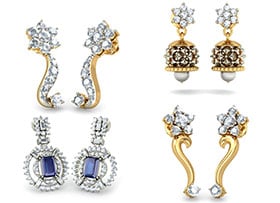 Online jewellery shopping is slowly making its way to shoppers’ hearts. The online jewellery market is slated to cross Rs 24,000 crore by 2019. With Indian ecommerce on a growing spree, more established brands are keen to have a slice of the pie.

“More offline players will enter into the marketplace sooner or later,” predicts Joy Alukkas, Chairman of the Joy Alukkas Group. “With the backing of youth, sales of jewellery via online channels will only grow in the country,” he feels.

D Dhanuraj, Chairman, Centre for Public Policy Research, opines that the growth of trust is a major factor,

“The trust factor in the online space has increased in the recent years.”

Growth in investment in online jewellery

The increasing popularity of online jewellery is prompting companies to invest in their ventures. Arvind Singhal, CEO of Bluestone.com has confirmed that the company will be investing Rs. 40 crores in marketing over the coming year.

“The purchase is now towards more trendy jewellery and we are focused on introducing new designs and collections for our customers,” he said.

Bluestone’s investors include Kalaari Capital, IVY Capital, Dragoneer and industrialist Ratan Tata, who has a privately held stake in the company. The company has clientele abroad as well including UK, Canada, US and Australia. Singhal is confident about the company’s performance. He says that the company will be EBIDTA positive in the next two plus years.

Leading online lingerie store Zivame has plans to open roughly 50 physical stores by the next fiscal. The company, which opened its first offline store in Bangalore in late 2015, has earmarked Rs. 40 crore for the next phase of its offline stores. Founder CEO Richa Kuar confirms,

“By March 2017, we plan to open at least 40-50 offline retail stores in a phased manner and to spend about R40 crore for this. The stores would mainly focus on enhancing customer experience and creating a bigger brand image for Zivame.”

The Indian ecommerce industry is at a tough spot. Flipkart is going through a few undesirable situations with its sellers. Does the progress of the jewellery and lingerie industry indicate that there is still hope?

Next Article Can online marketplaces only help you sell? Or are there more benefits?