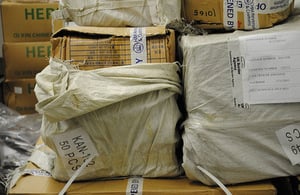 With an aim to provide a level-playing field for traders and retailers in the state, the Gujarat government on Wednesday passed a Bill to levy entry tax on goods purchased through e-commerce portals.

The Gujarat Tax on Entry of Specified Goods into Local Areas (Amendment) Bill, 2016, was passed in the Assembly in the absence of Congress members, who were on Tuesday suspended for two days by the Speaker.

The Bill changed the present Act of 2001 that did not cover e-commerce transactions, which according to the government, was adversely affecting the local traders as the goods coming in the state through such means were sold at a much cheaper rate due to non-payment of any tax.

“Due to the recent development in the field of online purchase, web-based software applications or through tele-shopping platforms, which does not attract any tax under the present Act, local businesses were adversely affected,” state finance minister Saurabh Patel while presenting the Bill.

By the Bill, the word “importer”, as specified in the present Act, now also covers those who “bring or facilitate to bring any specified goods for consumption, use or sale in Gujarat from any part of the country using online platforms.”

Further, such an importer is now liable to collect the tax from the person (consumer) for whom the goods are brought and pay it to the government in a prescribed manner.

This Bill was introduced after several trader bodies made representations to the state about online platforms selling “cheap” goods in the absence of a proper tax structure applicable to them.

After taking into account their demands and to provide these local businesses a level-playing field, Patel had announced he would bring a Bill while presenting the state Budget earlier this month.

“The state government would announce the rate of tax as well as other procedures to be followed by the importers through a separate notification,” Patel added.

As proposed in the Budget of 2016-17, the Gujarat government on Wednesday introduced and passed the Gujarat Value Added Tax (Amendment) Bill, 2016, proposing to increase the value-added tax on SUV (sport utility vehicle) cars and on expensive motorbikes from 15 per cent to 17.5 per cent.

The new rate of 17.5 per cent tax will be applicable on cars and SUVs with a price tag of more than Rs 15 lakh each and motorbikes which are priced more than Rs 2.5 lakh each.

Through this Bill, the state government has also increased the value-added tax on pan masala from 15 per cent to 22.5 per cent.

The Registration (Gujarat Amendment) Bill, 2016, provides for compulsory registration of various documents, such as development agreement between builder and land owner, as well as agreements relating to the constitution of partnership where partners bring in their immovable property.

Next Article [Infographic] Ecommerce in India – 2015