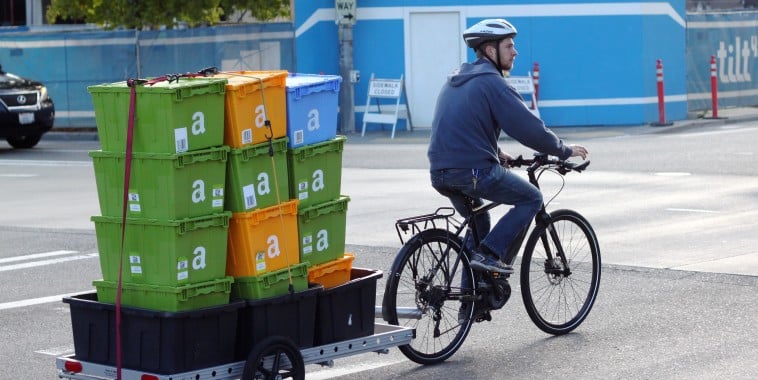 From Drones to Dabbawalas, anything and everything has been tested in logistics, so now for something a little more conventional. Ecommerce giant, Amazon whose logistics arm was a key differentiator in 2015, has decided to pilot delivery by bicycle in India, for distances between 3 and 5 km. The plan is to reduce delivery time during busy traffic jams and also cut down its carbon footprint.

“Being conscious of the environment we live in, reducing carbon footprint is the need of the hour. We have taken this ecofriendly step by introducing bicycle deliveries, which also helps delivery associates with easier access in congested metro cities,” said Samuel Thomas, director, transportation, Amazon India.

The project kicked off in Mumbai and is now in:

Ad: Scale up on Amazon, multiply your online sales with Browntape.

IOS recently reported on the challenges faced by delivery boys on motorbikes, which include health and safety issues. It will be interesting to see if there is a demand to take up the new job.

“In India, the density of population is higher, hence bicycles will help them reduce cost compared to bikes (motorcycles). Similarly, in the US, since the market is less dense, air cargos will help them reduce cost, reduce time and improve accuracy. The purpose is the same, how it is done is different, depending on the geography,” said Devangshu Dutta, chief executive officer,  Third Eyesight.

Next Article The IOS Seller Meet is back!