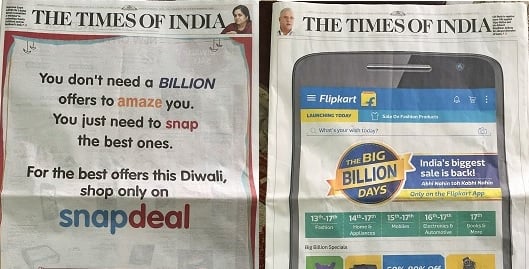 Ad war between online marketplaces was pretty evident during the October festive sale. Not just the ecommerce giants, but television & print ads placed by online furniture, lingerie, grocery and home-service start-ups made sure that the offline space was filled with online companies’ promotional campaigns.

As a result, advertising industry is laughing all the way to the bank.

Rise of ecommerce gives a boost to domestic advertising

Business Standard reports, that over 2,000 new companies has joined India’s advertiser base so far, which is something that hasn’t happened in the last five years. It is estimated that the number will grow by 500 more by the end of 2015.

Hari Krishnan, Managing Director of media agency, ZenithOptimedia shared, “While there was heavy spending by political parties due to general and state elections last year, one cannot ignore the bump-up that new categories like e-commerce, start-ups and new-age companies are giving to overall advertising. Flush with funds from private equity and venture capitalists, these companies are hardly missing out on any opportunity to make themselves visible.”

He said, “The e-commerce and start-up boom has led to a surge in the entrepreneurial spirit of many Indians. With access to seed and growth capital becoming fairly easy, many entrepreneurs now have the confidence to advertise their products and services.”

Barring urban cities, the major population of India doesn’t spend much time online. But they do want to shop, get good deals & discounts and get home delivery. So to reach this section of people ecommerce companies use the offline medium.

Print and television ads also build credibility, brand recall and communicate the idea successfully. Who can deny the high impact of Shakrukh Khan appearing in newspapers & commercial ads saying ‘I’m a Big Basketeer. Are you?’ on the online grocery portal Big Basket’s sales?

The wide reach of newspapers that are printed in local languages makes it the most traditional as well as effective mode of advertising.

As long as these ad-spends convert in sales, investors won’t complain about the expenses. As for advertising agencies, they are happy counting cash that ecommerce is bringing in.

In The News Author Shweta Singh Date November 6, 2015
Share On