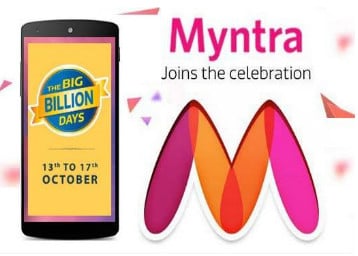 Yesterday, IOS shared some interesting data on which marketplace is winning the festive sales race. While Flipkart seems to be the one ahead, it’s quite possible that Amazon might takeover very soon.

Financial Express reports that Amazon might soon race past Flipkart.

Based on Alexa’s real-time web traffic data after the conclusion of Big Billion Days- Day 1, Amazon’s rank is 85 at the moment, whereas Flipkart’s 79. The current gap is very less considering 6 months back in April, Flipkart was at 87 and Amazon at 111.

Amazon has managed to climb up consistently, which is why industry watchers & sellers believe that the US based marketplace is capable of defeating homegrown Flipkart this festive season.

Snapdeal with a ranking of 167 is way far behind in this competitive race.

Mobile phones and mobile accessories are the top selling items on ecommerce sites. And Flipkart is looking to take maximum advantage of this trend during the ongoing peak season.

A top Flipkart executive revealed to ETRetail that the company is looking to sell one out of every four mobile phones sold in October. This means that offline retail chains as well as online competitors will be left behind.

Ankit Nagori, Chief Business Officer of Flipkart said, “Tonight (Wednesday), we are opening the mobile phones category. We expect a huge frenzy around it…I think today we will close ahead of our plan.”

He added, “Flipkart is the number one marketplace for mobile phones if you look at online, offline, everything. If you look at the month of October, we would have increased the market share by 5%.”

Myntra, owned by Flipkart, is doing well in Big Billion Days sales too just like its parent company. The fashion etailer sold around 5 lakh products on October 13, first day of its sale. The company witnessed a fourfold increase in app installations and its GMV multiplied by six times.

Ananth Narayanan, CEO of Myntra shared, “The sale has just been terrific. I think October 13 was probably the largest single day ever for Myntra by every method like app installations, orders and gross merchandise value (GMV). It was a record for us in all these areas.”

Overall, the ecommerce industry is earning some serious money this festive season looking at the revenue of all online marketplaces and retailers.