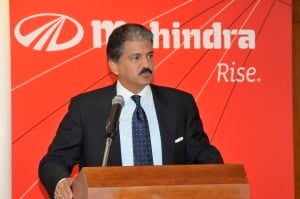 In February, the Mahindra group announced that they had taken over the baby products ecommerce portal Babyoye, which would compliment their existing offering in the baby care segment, Mom and Me through online and offline synergy. Another successful online retail brand from the house of Mahindra is the Beanstalk toyshop.

Actually when you think of Mahindra, the first thing that comes to mind is automobiles. Last year, Mahindra tied up with Snapdeal to sell their SUV Scorpio online. Other portals where you can pick up a Mahindra motor online include Junglee, Gaadi.com and OLX.

Mahindra now plans to offer all its products to consumers under one roof with the launch of the M2ALL.com ecommerce portal, which is part of the subsidiary Mahindra & Mahindra and has been registered as a new company, under Mahindra e-Market Pvt Limited.

“India’s e-tailing market is expected to reach $50 billion by 2020, growing at a CAGR of 47%. we are seeking this opportunity and this is the right time to go into it,” said VS Parthasarathy, Group CFO, Mahindra.

By 2017 Mahindra aims to make available on the M2ALL platform all Mahindra products, along with promoting manufacturers services and products which compliment the company.

The online platform has begun selling the latest SUV MahindraTUV300. The product can be booked online and will be delivered with the help of Mahindra partners which include the dealers, distributors and logistics team.

The multi-national conglomerate is planning to build a great ecommerce team and is on the lookout for talented and experienced individuals from other companies in the field, in India. Currently the organisation is operating with just ten employees, with an average age of 32 years.

Mahindra plans to sell its products on the portal at the same rate as its offline prices, which will be an interesting strategy.

In 2009, Mahindra took over tech company Satyam and formed Mahindra Satyam, before it was successfully merged with their IT business Tech Mahindra in 2013. They will now surely be able to leverage greater synergy with their IT consultancy company to take on the challenge of ecommerce, in terms of analysing data and building a strong team.

Who will be the next respected Indian blue chip company to bet big on ecommerce?