India yet to enter top 10 ecommerce markets list in the world; only 180th the size of China

With so much money being pumped in the Indian ecommerce sector by national as well as foreign investors, it seemed that we have arrived. The exponential growth of online shopping convinced us that after US and China, it’s India that’s next. But you will be surprised to know that India doesn’t feature in the top 10 ecommerce markets in the world. 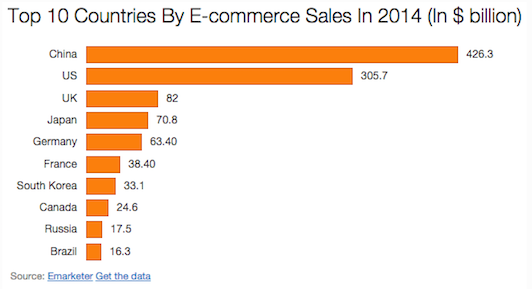 It’s unfair to compare India’s score with other International players as ecommerce picked up here much later. Reiterating the same thought, a technology expert, Rajnish said, “If you look at Japan, China and US, ecommerce became popular as early as 2002-2003. It has taken them about 12-13 years to reach where they have reached.  E-commerce really took off in India only in 2012-13. It will take India also that much time to reach there.”

There is a long way ahead but looking at the rising popularity of ecommerce, there is every reason to believe that it will only get better from here. Provided we fix up logistic and Internet issues. Building customer trust, speedy services and improving customer service are other elements that need work or else Internet users won’t entertain online payments and digital penetration will remain low. Here’s hoping that these kinks will be taken care of and India reaches the top of the list.