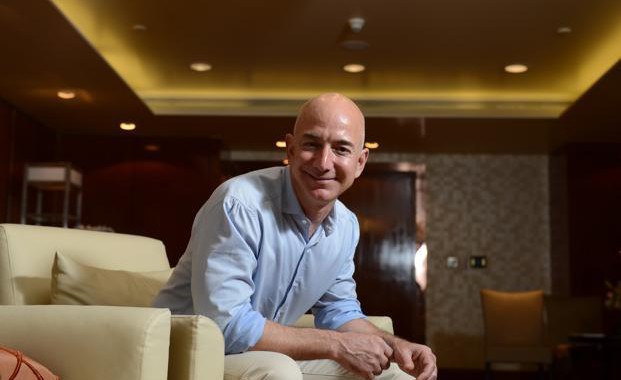 Jeff Bezos, founder and chief executive of Amazon.com Inc., said the world’s largest online retailer will continue to invest heavily in India and other businesses and markets that have significant potential, despite pressure from some investors to rein in spending and focus on boosting margins.

Bezos is in India, two months after he said in late July that Amazon would pump in as much as $2 billion into its India business as it aims to become the leader in one of the fastest growing e-commerce markets and rev up sales growth outside of North America. Amazon launched its India marketplace in June 2013.

“The reason we’re investing so much in India is because it’s already working so well. We must’ve launched just at the right time and the team must’ve had the right ideas and they’ve had to keep setting expectations higher and higher,” Bezos said in an interview on Sunday.

Amazon’s $2 billion investment was announced just a day after home-grown Flipkart raised $1.2 billion from investors. Earlier in the year, smaller rival Snapdeal, too, received $233.7 million and also an investment from Ratan Tata in his personal capacity. India’s e-commerce market, excluding travel, is expected to surge sevenfold to $22 billion in five years, according to a November report by brokerage firm CLSA. By that time, it is expected to be the world’s third largest e-commerce market after the US and China.

Bezos’s vision is to make Amazon the world’s most customer-centric business. The company has been criticized by some investors for not making money. That is partly because Amazon has been investing heavily to build warehouses and gadgets such as the Kindle reader and Fire smartphone.

In the June quarter, Amazon posted a loss of $126 million, much wider than what most Wall Street analysts had estimated. On the other hand, the profitable Alibaba Group Holding Ltd wowed US investors and raised about $22 billion in an initial public offering (IPO) in September.

“We never tried to convince anyone that they should be an investor in Amazon,” Bezos said. “Here’s what we’re doing—if that makes sense to you then great. Over time, our approach has been very successful.”

Bezos is “super excited” with the way things are shaping up in India. The company’s Indian team has created tools and processes that have made it easier for small businesses to participate in the digital economy, he said.

“One of the inventions this team came up with is Easy Ship. This is making it easier for the small businesses to reach a bunch of customers online. It is one of the things we may export to the rest of our markets,” Bezos added.

Edited excerpts from the interview:

What is your goal in India?

The reason we are investing so much in India is because it is already working so well. Amit (Amit Agarwal is country manager of Amazon India) and his team launched India just a year ago and it’s already grown so quickly. We must’ve launched just at the right time and the team must’ve had the right ideas and they’ve had to keep setting expectations higher and higher. And at Amazon, if something is working we like to double down on it and invest more in it.

There’s a lot of opportunity to invest in India such as on the infrastructure side, transportation side, fulfilment centres, mobile, customer acquisition, product categories. This team has big plans for the fashion category, for instance. So lots of different things. I’m here because I wanted to celebrate with this team and also meet with customers. I had a luncheon with customers earlier today.

India is growing very fast at a large scale. This team has created a bunch of tools and processes that make it easier for the small and medium businesses to participate in the digital economy. One of the inventions this team came up with is Easy Ship. This is making it easier for the small businesses to reach a bunch of customers online. I’m so excited about that. It is one of the things we may export to the rest of our markets. From my point of view, what this team did well is that they said let’s embrace the small and medium businesses and figure out how to give them tools to reach millions of online customers. That unleashed the growth we’ve seen. We also got lucky with our timing.

Considering what India has done so far for you, how important will this market be in the global Amazon picture over the next three-five years?

It’s a difficult question to answer with any certainty, but if we continue on this path, it’s going to be a fantastic, huge part of Amazon. The momentum that they have, the fast growth, the large scale—I’m super excited about it. I love this business in India. I consider this business to be extremely important, but I have to say that I love all of my children (referring to countries that Amazon has a presence in)… We have got a lot of great businesses and India is one of them. I do not want to pick favourites.

How do you view competition in e-commerce? In China, you have Alibaba, and in India, there are marketplaces such as Flipkart.com, Snapdeal.com and Myntra.com, and they are going to give you a run for the money. How do you deal with it?

There has been pressure on Amazon from some investors and analysts to cut spending and try boosting margins. How do you deal with this? Would you consider sacrificing spending on new things in order to improve profits?

The most important thing for us or for any publicly traded company is you have to be clear about what your approach is. And then, because investors come in all shapes and sizes, they have different investment horizons, they have different investment theses—if we’re clear about our approach, then they can self select. So there’s a famous Warren Buffet quote: “You can hold a ballet, that’s okay. You can hold a rock concert and that’s okay. Just don’t hold a ballet and advertise it as a rock concert.”

So we have from the very beginning—1997—when we went public, we’ve been super clear or we’ve tried to be about who we are and what our approach is. We don’t even claim our approach is right. We just claim it’s ours and then people get to choose. And undoubtedly, there are a lot of people for whom it’s not right to be an investor in Amazon. And that’s okay with us. We never tried to convince anyone that they should be an investor in Amazon.

Here’s what we’re doing—if that makes sense to you then great. Over time, our approach has been very successful. We went public at $1.50 a share on a split-adjusted basis, and our stock is $300 a share. So we have created a lot of value for shareholders. We have a bunch of businesses and a bunch of arenas at Amazon that generate a significant amount of free cash flow. India is a perfect example where we’re taking free cash flow that we’re generating in other businesses and investing that in India. And we’re doing that because we sense real opportunity that it’s working. We wouldn’t invest $2 billion unless we had evidence that it’s working. Most of our investors, or at least the ones that study what we do, they want us to do that.

Now though, there is Alibaba (which raised $21.8 billion in an IPO in September) in the picture, which gives investors more options in e-commerce. Alibaba also has a higher margin business compared with Amazon. Do you think you will have to ever change your approach because of this?

No. I would not do that. Our approach is so deep inside us…you should always ask the question that what are your firmly held beliefs and you should revisit them from time to time, and one of my beliefs is that the customer should come first and (the other) one is that you should always invent your way out of the box. The company has developed a culture…today if you have to become close followers instead of pioneers, I think most people in the company would not even be there any more because the kind of people we have attracted and the kind of people who come and stay and love Amazon are the people who love pioneering. You should never try and be somebody else, and the other thing that I tell people internally all the time is that don’t get addicted to being shiny because shiny does not last. We were very shiny in 1999 and then we were the piñata. It goes back and forth. You have to know who you are and believe in what you do and let the rest of the world do whatever they are going to do. And I think that works if you have your compass and if your compass is your customers and what their needs are… So far that approach has worked for us. I see no reason to change that approach.

Featured In The News Author Livemint Date September 29, 2014
Share On

Previous Article [Infographic] 32% e-consumers browse through deals and catalogues once a day at least !!

Next Article Amazon, Future Group argue over discount policy; split on the cards