It Is Official: E-commerce Is Killing Traditional Retail

All recent reports on retail industry in India seem to point to the exact same thing. The future of retail in India is very much online.

The major e-commerce players in India are still depending on VC funds to handle daily operations and steep marketing costs. But, the market, overall is witnessing staggering growth rates. E-commerce players are doing everything in their power to keep their customers happy, from bringing the cart to twitter feeds to letting people try before they buy at the comfort of their homes. And this is bearing fruit!

According to a recent Forrester research, 16% of India’s total population of 1.28 billion are online. Unlike developed countries where PC penetration rates have driven Internet adoption, faster mobile penetration is helping boost the Indian Internet population, thanks to the growth of “mobile-only” Internet users over the past two decades.

If we were to go by Statista’s forecasts, the B2C e-commerce revenue in India is expected to reach 7.51 billion U.S. dollars in 2016 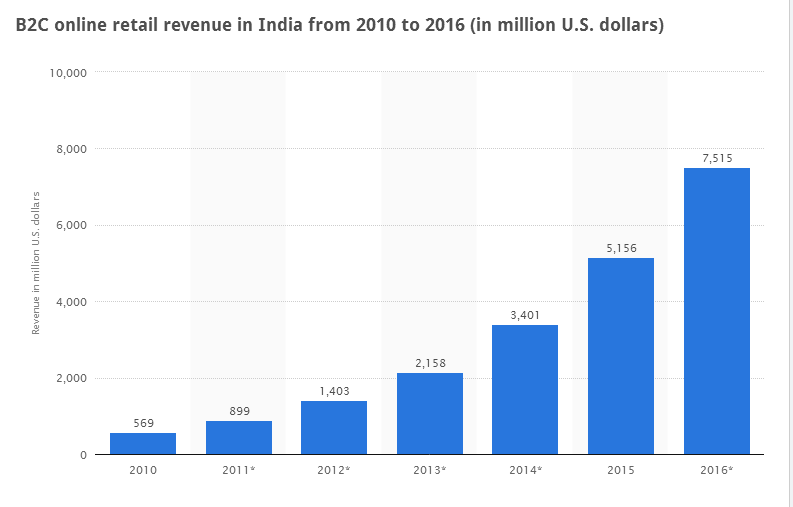 Investors are keen to ride the wave and are pumping in a lot of money in the industry as well. A cumulative funding of US$ 1,650.5 million has been raised by Indian e-commerce organizations since 2009, not including the $1 billion speculated to have been raised by Flipkart. Technopak estimates that investments will only expand from the current $2.3 billion to $32 billion (Rs 13,700 crore to Rs 1.9 lakh crore) in the next six years. In fact, in the last year, ecommerce companies have cornered 72% of the $1.3 billion (Rs 7,700 crore) that went into Indian technology companies across 266 deals, according to research firm CB Insights. 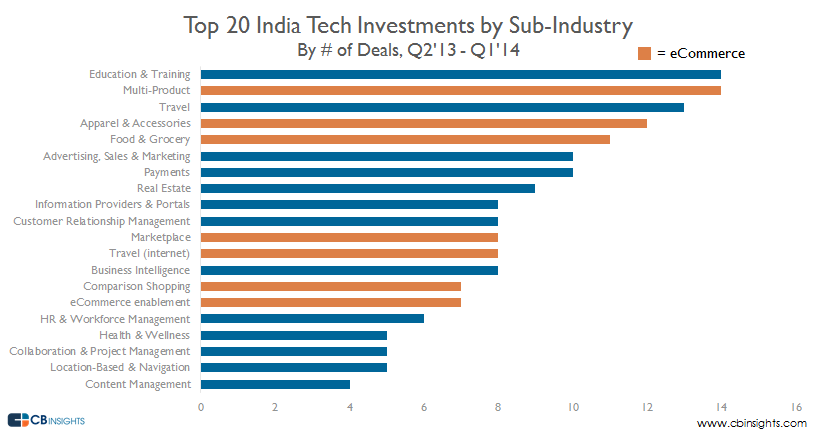 As crazy as it looks, this might be justifiable considering e-commerce in India has just reached its tipping point in the eyes of investors. While it might take a long while before the e-commerce companies in India actually start making profits, the increased marketing budgets and the race to be top of mind are playing to the advantage of the Indian Online retailers, about one million of them – small and large – who sell their products through various e-commerce portals.

According to Forrester, India’s overall retail industry is estimated to be worth more than US $0.5 trillion. Of that, 92% is estimated to be “unorganized retail” — i.e., small, family-run shops. The organized retail segment (which comprises supermarkets, hypermarkets, specialty stores, and large retail chains) accounts for the rest of the market and is mostly present in tier one cities. The relative under-penetration of the organized retail segment in tier two and tier three cities represents an opportunity for online retailers because retailers in the so-called unorganized retail sector do not have the same product selection as their large chain counterparts.

Crisil Research findings also forecasts the industry’s revenues to more than double to around 18 per cent of organised retail by 2016 from around 8 percent in 2013. Even at this rate, online retail’s share of the overall retail (organised + unorganised) pie will be just over 1 per cent. (That compares with 9-10% in the US and UK, and around 4-5% in China.)

It is time for traditional retailers to move online

The research also compares the deteriorating financials of physical retailers over the past 3 years with the rapid growth of its e-tail counterpart to conclude that online is the way to go, in the future.  Considering that, at an aggregate level, operating and net margins of companies such as Shoppers Stop, Cantabil, Kewal Kiran, Provogue, and Trent have all shown a declining trend this might be a forecast that needs to be taken seriously. The surge in online retailing is surely not the only reason for the weak performance of traditional retailers. Other factors such as economic slowdown and local competition also play a part in the slowdown. However, what’s irrefutable is that the online upstarts are chomping away offline business.

To stay in the game, traditional retailers are working on internet strategies, and in some cases, promoting their online stores more than their offline channels.  What we are witnessing in India today played out in the US about a decade-and-a-half back.

It is no longer enough to just be offline, it is time brands – small and big – start working on their online strategies. In fact, with the right strategies, they can give their online counterparts a run for their money. Walmart is a clear example of how a big box giant can evolve into an online innovator.

With the restrictions on FDI expected to ease out, the competition could only become more intense. But it also opens a plethora of opportunities for the ecommerce industry and online retailers.

The verdict is pretty clear. If you have started selling online, your business is on the right track. If you are not, it is probably time to pull up your sleeves and jump in. There are many players in the market that already provide end to end solutions for SMEs that want to start selling online. After all, numbers never lie.

Piyush is the Editor-in-Cheif of IndianOnlineSeller.com. Piyush has many years of experience in Ecommerce, has had experience with marketplaces in Europe, USA and India since 2007, both selling domestically and dealing with imports and exports.