Why is Flipkart the only one not excited about FDI in ecommerce ?

You probably expect a serious answer for this. The real answer, however, is far from it. Amusing even. And pretty obvious to someone who’s been following the air-tight competition scenario in the Indian e-commerce market.

While everyone awaits the new government’s announcement allowing FDI in retail, this is what Flipkart had to say:

“The only e-commerce player that will benefit from such a move is a company which is already operating in India as a marketplace and wants to enter the country through an inventory based model,” said a spokeswoman for Flipkart. (statement given to ET)

Clearly indicated at the threat for Flipkart’s dominance once Amazon is allowed to stock its own inventory and sell directly to consumers, the statement shows that Flipkart is already beginning to foresee the heightened competition coming its way. Its amusing to hear such a statement from someone like Flipkart who is a market leader is most respects.

Is this their way of saying they are afraid to compete with Amazon once Amazon starts its inventory model of business?

Started off with inventory model of business

Started getting international funding to support expansion of its operations

Funding received by Flipkart so far 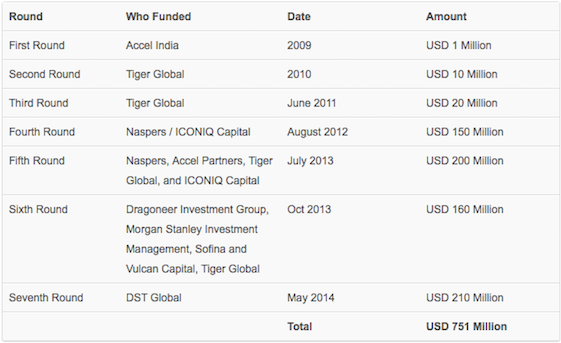 Flipkart is wrong this time !

Flipkart is our home-grown e-commerce giant who has expanded keeping consumer interests in mind. But this time they are wrong. Of course, Amazon will be the happiest of the lot to be able to sell their own products. But its not the only one which stands to benefit.

FDI will benefit not just Amazon, a lot of other Indian sellers as well who will now be able to raise foreign funding and expand operations.

International players like Walmart and Best Buy will be able to sell online in India by tying up with local Indian partners.

Flipkart is worried of the competition it will have to face from Amazon and other international players who may enter the Indian e-commerce market, in addition to Indian players expanding operations with foreign funding.

However, FDI in e-commerce will create healthy competition in the market amongst sellers which will help to fine tune and ease operations.

Also, it will provide a more level playing field for everyone, rather than just one player like Flipkart dominating the market.