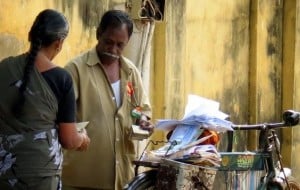 Maybe it is because I don’t generally watch TV, but the other day I was quite surprised to see that most of the advertisements aired on television were endorsing some or the other online retail channel. Koovs for fashion, Limeroad for ethnic wear, Pepperfry for furniture, Flipkart for everything else – the list is endless. The funny part is that viewers are not only prompted to use the channel to shop, but download the app to do so. This meteoric rise of ecommerce and mobile commerce, has it really become the norm? Has online retail really seeped into the Indian consumer’s mentality?

Some time ago, we did an article about the tier wise division of various cities in India that online retail caters to. Tier I cities are the metros, where online retail is commonplace and delivery is pretty much hassle free. Then there are tier II and III cities and town where online retail is still in the process of assimilation. Things become more and more difficult for ecommerce as we keep going down this run. While talking about ecommerce, and generally most things to do with internet, it is important to realise that only around 30% of the country’s population is actually connected to the network. This means that most of the nation’s population is still an untapped market for ecommerce and online retail.

How does the industry tackle this problem? One possible solution is assisted ecommerce. Let’s see how it works.

The ecommerce industry has been employing various tactics to acclimatise the consumer with the concept of buying something online. The obvious perks, like the fact that it is hassle free, that you don’t need to go anywhere to buy the product and that it arrives at your doorstep, are always there. Attractive returns policies, cash on delivery options and heavy discounts have been employed to goad the customer into buying online. But what if the customer has no access to the internet?

The problem assisted ecommerce is trying to solve is not the traditional fear of buying something without actually holding it in one’s hands. Rather, it is an effort to push the boundaries of the market itself, and including the large part of the population whose access to the internet is limited or non-existent.

A typical assisted ecommerce model is something like this – A customer walks into a brick-and-mortar store, selects a product specimen, places an online order with the help of the storekeeper and makes the payment. The product then arrives at the customer’s doorstep or at the store itself, depending on the logistical issues. Assisted ecommerce is thus a hybrid of traditional and online retail. Global ecommerce giants like Alibaba have already been practising this model and its variants in various places around the world.

The Indian scenario with respect to assisted ecommerce has started taking definite shape. Earlier this year, online retail giants Flipkart and Snapdeal announced their foray in assisted ecommerce. Flipkart has teamed up with Spice Haat to apply this model for the sale of mobile phones in 30 outlets across 19 cities. This is especially beneficial when it comes to brands like Motorola and Alcatel whose exclusive sales rights belong to Flipkart. Snapdeal on the other hand, is also aggressively moving towards the assisted ecommerce model by planning to launch around 5,000 ecommerce kiosks across cities and towns that fall in the tier II category or below by the end of 2015, with the help of the financial inclusion solutions company Fino PayTech.

Bangalore based startup StoreKing got an early start in 2012, and have around 8,000 operational stores in South India. Hyderabad based startup Ipay boast around 6300 retailers in 2500+ locations around Andhra Pradesh and Telangana. The assisted ecommerce model has started to penetrate deeper into the Indian retail industry.

All this still leaves the fundamental question unanswered – can it solve the problem of insufficient reach, or is it just a temporary solution? One can imagine that there will come a time when the internet itself will be far more accessible and palatable to the consumer, and assisted ecommerce will not be required anymore. But then, we have to consider another scenario.

It is common for a tier I customer to go to a shopping mall and look at a particular product – a phone, a laptop, etc. and then buy it from an online portal. It is also not uncommon while shopping in a brick-and-mortar store to find a product that you like, but not in the colour or size or design that you want. Although it is natural that the consumer would then turn to the online portals, it is actually not a bad idea for the online portal itself break through the virtual screen and share space with the consumer, whether rural or urban. With the rise of affordable virtual and augmented reality technology, one can only imagine the shopping experience that the future has in store for us.

To know more about assisted ecommerce and in case of other queries, get in touch with Browntape. We are India’s leading ecommerce solutions experts, and we are always happy to help!