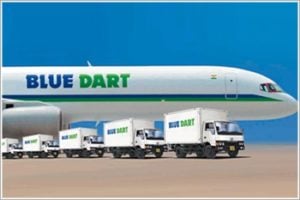 The need for improvement in logistics in the online retail equation is an ongoing debate in the ecommerce community. No doubt, the sector has come a long way since the advent and rise of ecommerce here, but complaints from sellers still abound.

In this review of logistics services providers in e-retail, Blue Dart is mentioned as one the most prominent pan-India service provider. However, online seller Saleem Syed begs to differ on this. He, along with his team, feel that fraud starts at Blue Dart.

Here’s what he has to say.

It is small in size, so any courier company counts this under 500 g and charges Rs 40-55 based on the service provider. Not the first time

We have been selling on eBay and other marketplaces for a very long time. Earlier too, we have complained to Blue dart managers about wrong weight cases. While supervisors agree that there is a mistake and we are given assurances that it would not be repeated, we find these to be empty words.

After dealing with them for years, we know that this is not a scanning mistake of the staff but done with ill intentions by the company. Fraud starts at Blue dart!

On eBay forums, there are many complaints about wrong weight cases, which happens with other couriers too. But the difference is, with them they are rare cases and with blue dart, it happens very frequently.

Courier partners get away with such issues because most sellers don’t find out about this – either because there are thousands of parcels being exchanged or because they don’t have the knowledge that this could happen. But when it does, sellers have to incur heavy losses. If it’s the marketplace logistics in question, you have to raise a query the resolvement of which could take weeks and months.

We have been facing so much trouble with blue dart that we feel they are doing a wrong weights scam. It should be booked legally and government should penalize them 1000 times. This could help in putting a stop to such scams and helping sellers.

Currently, if we complain to eBay, the case does pending as the departments don’t take any serious action against blue dart. And if the seller complains more seriously, blue dart is removed as a courier preference. But nothing more is done assure sellers.

Initially, they used to reply with responses like “sorry for inconvenience caused,” “It was a scanning mistake,” “it was new employee mistake,” etc. Many times, it was promised that it would not be repeated.

We have requested to be connected to the CEO of blue dart to address our grievances but to no avail. We have sent emails to higher authorities repeatedly but we have not found any solution for our concern.

Check each and every parcel you dispatch and cross-check on the corresponding courier charges.

Staff at Blue dart try to fool us with dimension of box and such as a reason. For example, I sent out a men’s inner vest recently in eBay poly cover. It is so light like a handkerchief that you could fit in your trouser pocket, which would weigh 100 g or so. For the same parcel, Blue dart shows 4000 g!

I am writing this after experiencing hundreds of such wrong weight charges from Blue dart. Unless we come forward and raise our voice to get attention, government might not take notice or come to know of such activities. We urge that some action be taken against Blue dart so that such instances can be halted.

Saleem urges his fellow sellers to come forward and file action against Blue dart for the wrong weight charges. Have you faced similar situations? How have you tackled? How did you find solutions? Do share so others can benefit and understand how to dodge such scenarios.