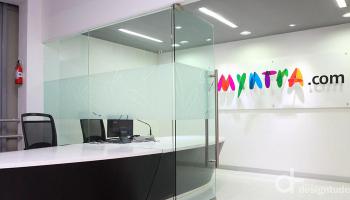 The online fashion turf is heating up! On one hand, ecommerce giant Amazon is all set to be India’s one-stop fashion shop. But its app-only etailer Myntra that’s winning in the online fashion department.

ETRetail reports that the fashion etailer is positive about crossing $1 billion GMV by 2016, which is double of its current GMV – $500 million.

Private labels will help them to achieve profitability

Goals are high and to make it a reality, Myntra is going to focus on private labels and exclusive fashion brands. Nearly 20% if its sales revenue comes from private labels and that’s why it makes sense to introduce new private brands.

The company recently launched “All About You”, its clothing line designed by popular actor Deepika Padukone. During the launch, Narayanan shared, “20 percent of our GMV is fashion brands. We hope to keep it at 20-25 percent. My sense is that this brand (“All About You”) will be $ 100 million in two years.”

In the past, the fashion etailer had successfully launched private labels like Roadster, HRX, Anouk, Dressberry, and Keek n Kooch.

Focus on app-only strategy will continue

For those still hoping that Myntra will revive its desktop site, give it up. It’s not going to happen taking Myntra’s growth strategy into account. The company is optimistic about the app-only move leading them to $5 billion GMV.

Narayanan revealed, “Our GMV is 60 per cent higher than what it was in pre-app days last year. Of course, we saw a 10 per cent dip in sales after the migration (earlier this year), but that was expected in the short term.”

Therefore, the etailer has big plans for its app platform.

“I want to make sure that we introduce Myntra Version 2 that we are planning in early November. It would have a bunch of features for creating social network, sharing and style forums where people can ask questions and get answers. A bunch of features are going to be introduced very soon which will be very helpful to consumers”, Narayanan disclosed.

Myntra is quite clear that m-commerce is the future and that you have to win in mobile to survive. And considering that the fashion etailer recorded a 6X jump in traffic and nearly 4-fold increase in revenue during Big Billion Days, who can say they are wrong?

Next Article Top sellers on Amazon this season get to meet Jeff Bezos! More incentives in store