Home  »  In The News  »  LocalOye, marketplace for services, returns to desktop after stumbling at app-only 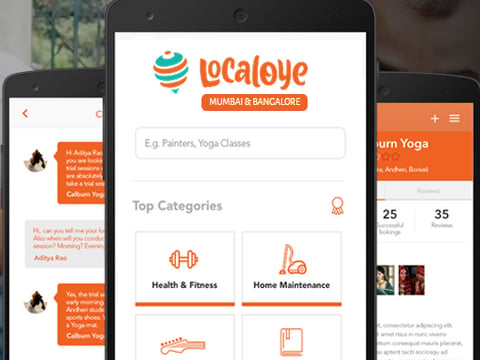 Flipkart is on its way to going app only come September. Post the Myntra website folding episode, many clamoured that it was a bad move, and Flipkart ought to learn from its mistakes. Fortunately or unfortunately, Flipkart seems to be in no mood to listen. However, not everyone is perched on their high horse.

LocalOye , a marketplace for providing local services like electricians, event planning, gadget repairs and beauty services among others (roughly 250 services), has recently reverted to its website after burning its hands in an app-only move. Trak.in reports with a cheeky reference to Flipkart, how LocalOye has reopened its website (b)owing to user preferences.

Focus on mobile users at the cost of desktop users?

The report raises some pertinent questions. Most start-ups are encouraged by the latest trend of going app only and shutting down the website. However, there are a good percentage of buyers who prefer to operate through their desktops.

Citing reasons similar to that of Myntra (and Flipkart), LocalOye claimed that almost 50% of their customers were from their mobile app. The report rightly points out that this is not a majority; the exact same percentage of customers is choosing to buy services through the website.

Shutting down their website (rather than maintain both) and forcing their customers to surf on their mobile might cost budding start-ups their desktop customers.

Dhitiman Hazarika cleverly lays out the arguments for a mobile platform in a piece in The Huffington Post. He rightly interprets that the future lies in mobile, and it is yet an unexploited terrain in the Indian market. It would work in Flipkart’s favour to make it there and capture the market before rival companies do so. Hazarika also says that smartphones have a greater chance of attracting the rural buyers than laptops. There is greater possibility to penetrate the rural and suburban markets using a smartphone as a mean than with a desktop.

Flipkart would also benefit from channelling its resources to the app rather than maintaining both. This would reduce chances of crowding the server in the event of huge sales, such as the Big Billion. Hazarika also mentions an interesting and important factor: web browsers like Chrome tend to be partial towards their mother company, and nudge users towards the parent website, based on their browsing preferences. This situation can be avoided in a smartphone.

Making a valid case against the ‘disloyal’ Indian customer base, Hazarika says that shopping on mobile will not allow the user to open a new browser to look for cheaper options in rival sites.

It is good to see that there are service providers who listen to their customers and implement changes based on their grievances. While there are two sides to every coin, marketplaces need to weigh all their options carefully before making such colossal changes.

In The News Author Sumangala Varun Date July 24, 2015
Share On

Previous Article Snapdeal to facilitate instant loans for its sellers

Next Article Paytm to facilitate collateral free loans for sellers