Based out of USA, Borderfree is a leading global eCommerce company focusing on international cross-border eCommerce solutions. The world’s most renowned brands rely on Borderfree’s technology and services platform for global expansion and transactions. They are constantly updating their customers on ideas to evolve and keep up with the changing retail scenario and sell to the large online customer database in more than 100 countries worldwide.

In February 2014, Borderfree released its latest Ecommerce Report on India, which gives insights on what makes India a unique market for cross-border commerce. As per the report, inspite of having huge potential due to its large population and rising internet penetration, majority of India’s population is yet to be urbanized, in effect yet to be exposed to ecommerce and its advantages. Also, the government has to relax the stringent rules and regulations with respect to foreign direct investments so that trade can flourish more in the country.

As per the report, Kirana stores still dominate the Indian market with only 5% organized retail, when compared to USA’s 85% and China’s 20%. Of the total retail sector, online sales contribute less than 1% (6% in China). With more number of male shoppers, time spent on retail sites is lower than other BRIC countries like China and the most popular product categories are apparel & accessories, electronics, beauty & personal care, household products and books.

Although internet penetration is rising in India, cross border purchasing is limited due to the following reasons:

India has the third largest number of internet users (13.2% of population), next to China (No.1) and USA (No.2). Currently, 47% of products purchased by Indian online shoppers are travel products, followed by 20% apparel and footwear, 19% books and 17% mobile phones and mobile accessories. 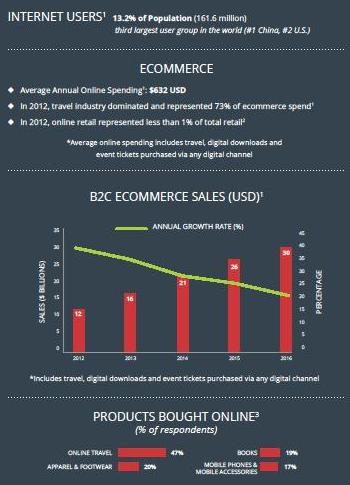 In 2012, about 724,000 Indian tourists visited US spending approximately USD 4.9 billion and ranked 10th in total spending in US. 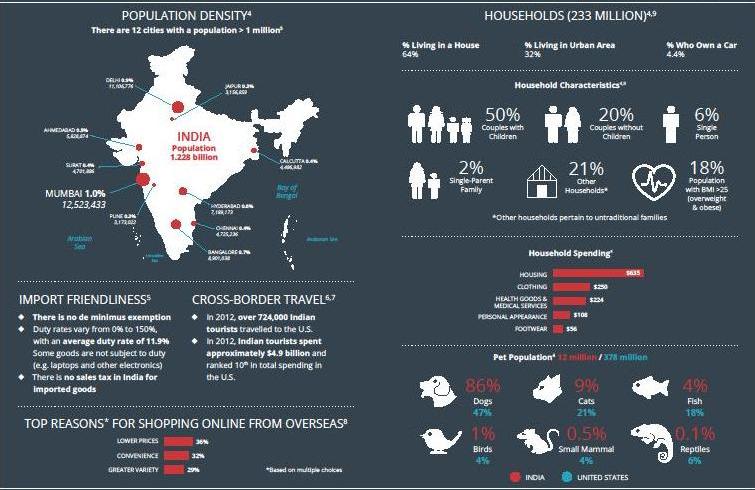 Debit and credit cards penetration into the various sections of society has risen over the years, however majority of online shoppers prefer cash-on-delivery payment option and the number of purchases made using credit/debit cards is 25% (combined) which is much lesser than USA. 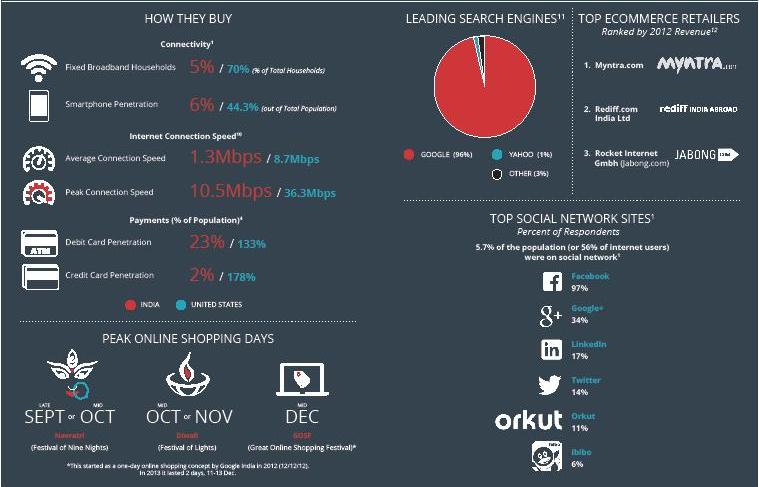 –          42% abandon their shopping carts due to non-favourable delivery dates

While majority of orders are placed between 11pm and 1 am, volume of orders are more or less equally spread out over the days of the week with a slight increase on Tuesday. Mumbai contributes to 26% of online sales with New Delhi and Bangalore following close behind at 18% and 11% respectively. Average order value showed a slight increase from 2012 to 2013 – USD 210 to USD 215, while it remained constant in the rest of the world at USD 183. The FX forecast of the report predicts an economic growth of more than 6% for India in 2014-2015. The proportion of disposable household income, which affects shopping behavior, though has shown increase is not as significant as the US. 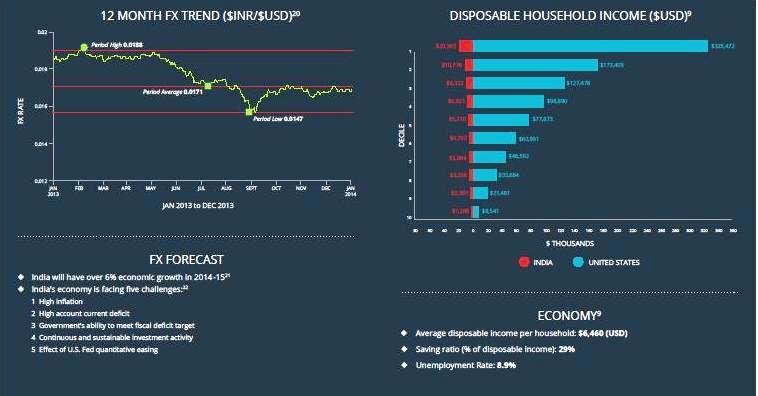 According to Borderfree, global retailers should give low priority to India for cross-border online shopping opportunities and investors should wait until the market matures further.

The above report is based on facts and figures of 2012. 2013 has seen tremendous growth in ecommerce and online shopping in India, mainly due to higher internet penetration and debit/credit card usage across even the tier 2 and 3 cities.

Although stringent tax regulations still limit foreign direct investments, this could be a boon for local brands and retailers. In the absence of foreign competition, Indian online sellers can better position their brand and sell at competitive rates through the existing marketplaces and other online selling options to expand their customer base and gain customer trust and loyalty.

Disclaimer: The report is based on facts & figures of 2012. Indian online retail has grown since and is more significant and promising for the online buyer community.

Next Article E-grocery market will grow at a CAGR of 62%, BigBasket to touch $1 billion revenue by 2018