Getting thrown out of home for rowdy behavior is probably not an exceptional case in our country with billions of people, a lot of them with not-so-normal childhoods which could lead to unruly behavior. Failing in school or dropping out of school, again not exceptional in this country of billions. Both the cases are understandably not accepted in society and such children are deemed failures in life.

Not Vimal Patel. Having dropped out of school in class 7 and thrown out of the family home in Anand, Gujarat for rowdy behavior, he did not go astray and neither did he give up on making a mark in life. His perseverance and hard work over the years paid off at every step in his journey to becoming the founder, chairman and managing director of the Rs 50 crore Suwarnsparsh group, headquartered out of Mumbai.

When Vimal dropped out of school, he used to spend a lot of time loitering around with friends. However, he also learnt about gemstone polishing from his father, who made a living polishing rough diamonds. At the age of 20, he got into a bitter argument with a neighbour which led to a serious and rough fight which upset his father so much so that he was asked to leave the house and find work in some other city.

With no other option but to move from his hometown, Vimal started living with his cousin in Bombay from March 1996. Armed with his stone polishing knowledge, he took up a Rs 4,000 job of polishing diamonds at a factory in Chitra Bazaar, South Mumbai. Though he got a 75 percent increment in salary in two years, he knew he wouldn’t be able to grow beyond a certain point if he continued there.

This realization led him to broking rough diamonds and gemstones on a commission basis in November 1997. Joining some friends who were already into this line of work, he learnt the basics of the trade from a friend. Being brokers, they were the middle men between traders who came from Sri Lanka and Thailand with different varieties of rough diamonds and local retailers and traders who wished to purchase these. In addition to a cut from the bargain, they would also get a brokerage for their efforts.

By March 1998, Vimal was fully involved in the business and started seeking ways of expanding his reach. Instead of limiting himself to South Mumbai, he targeted interested parties from the Mumbai suburbs also to create a wider network of local traders. Earning commission of Rs 1000-2000 per day, he managed to increase his savings to Rs 50,000 by 1999.

With his confidence and savings, he started his own trading company, Vimal Gems with the seed capital of Rs 50,000. Though he still operated from his cousin’s house, he got a few of his cousins from Gujarat also to work for him and by the end of the year 2000, Vimal Gems’ turnover amounted to Rs 15 lakh with an employee strength of 8. As he was able to pay in cash, Vimal would buy rough gemstones directly from foreign traders at additional discount and then sell to local traders at higher rates.

Inspite of the usual difficulties of starting a business, Vimal was blessed to have achieved the kind of success he did so far. However, the first blow to this occurred in April 2001 when one of the employess ran off with nearly Rs 29 lakh which belonged to a trader. All the investments had to be sold off to repay the trader. With no other option left, Vimal went back to broking gemstones for commission. He managed to save enough within five years and restarted the business. Not wanting to repeat the previous experience, he leased an office space in Zaveri Bazaar for administrative activities. Additionally, he started travelling to Sri Lanka and Thailand to procure rough gemstones and diamonds directly from the mines, which meant he got better quality stones at much cheaper rates. When resold to Mumbai’s local traders and retailers, his profit margins increased and business also grew accordingly.

The second blow came in 2008 when recession hit. Based on credit, business suffered as payments were delayed. Due to the shortage in liquidity, imports of stones suffered. However, this proved to be a blessing in disguise as Vimal now thought of diversifying into retail.

Probably one of the best decisions he made, Vimal opened a concept jewellery store. In May 2009, he leased a 1200 sq.ft store at Jalgaon, Maharashtra and invested around Rs 37 lakh for gemstones and Rs 18 lakh for one-gram jewellery. He hired an astrologer so they could offer customers on-the-spot astrology consultation to decide on the ideal gemstone to purchase based on zodiac signs. However, it was not compulsory to make a purchase even if astrology service was availed of. Despite this, most customers purchased from them as they had the cheapest rates.

The business from the retail outlet amounted to Rs 1 lakh on the first day itself. Among other considerations in deciding their business policy, Vimal and team had decided on a key factor – Customers got an assurance from them that should the gemstones fail, they would give a 100 percent refund to the customers. A separate company called Suwarnsparsh Industries Private Limited had been started to handle this aspect.

By 2009, the success of the first outlet led to four more outlets in Mumbai and Pune with a turnover of around Rs 2.5 crore in 2009-10. Seeing opportunity, Vimal started another company in 2011, Suwarnsparsh Gems and Jewellery Limited and a 6000 sq.ft factory in Vashi to manufacture jewellery for their stores. This helped to reduce costs by 70-80 percent.

Today, Suwarnsparsh group operates 52 retail outlets across Maharashtra with 550 employees. Talks are in progress with some private equity firms for investing around Rs 50 crore into the business to enable expansion into other cities like Delhi, Chennai and Kolkata. Vimal proudly says,” By 2017, we aim to have 100 shops and exceed the Rs 100 crore revenue mark.” 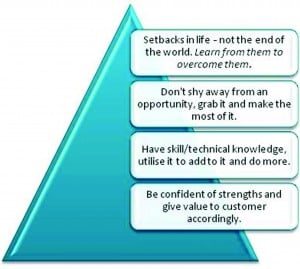 Such success stories are a true inspiration to anyone who wants to make a mark with his own efforts. Vimal has proved that where there is a will there is a way. With calculated and careful steps, he grabbed the opportunities that came his way and did not lose hope when faced with setbacks. In fact, they proved to be blessings in disguise as he came back stronger and wiser.

Would he have diversified had he not faced the hurdles due to recession? Would he have faced such success without the immense and practical knowledge he gained along the way? One can only wonder.

Luck definitely has a part to play in one’s success. But without hard work and perseverance, even luck cannot guarantee success. Any aspiring online seller can take inspiration from Vimal’s story and take his/her online business to new heights.

Do you want to tell the story of your Online Business? Do you want to share your online selling experience and success story? A new seller or budding seller can also tell his/her story. Write to us at editor@indianonlineseller.com or post your comment with contact details and we shall get in touch with you.