Indian Ecommerce grab the eye of more and more investors

With the growing popularity of online shopping in India, more and more investors are keen to invest in ecommerce firms and marketplaces with potential growth. With the recent influx of capital into marketplaces like Flipkart and Snapdeal, the scene can only get better with existing players getting bigger and better, and more players entering the Indian Ecommerce market. 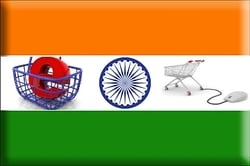 Currently, online shopping is most popular among the middle class youth who have more disposable income as compared to a few years back. However, in the next five years, people from smaller cities are also expected to contribute significantly, if not higher than the metros, to online sales. The sales from tier 2 and 3 Indian cities are already at a rise with higher disposable incomes and growing exposure to internet and mobile internet.

Investors, both Indian and foreign, have different reasons for valuing India as a potential market and eyeing the business opportunities:

In 2013, investors pumped in $602 million into the ecommerce space. This year has already had $288 million (Rs 1,785 crore) in the space. Snapdeal raised $133.7 million from existing investors which includes eBay Inc.

According to a 2009 report by Internet And Mobile Association of India (IAMAI) and KPMG, Indian ecommerce market was growing at the average rate of 34% annually and was expected to touch $13 billion by end of 2013. The report established a direct relationship between the value of ecommerce, the number of internet users, the number of online buyers and the openness to FDI.

Apart from the stringent government regulations on FDI even now, the other factors have witnessed substantial growth since then. Significant internet penetrations due to growing access and availability of broadband connections have increased the exposure of internet users and buyers. Smartphones and tablets are also more affordable and available in all budgets now due to which people have access to internet even on the move.

The above factors coupled with the convenience and ease of online shopping prompt more and more people to turn to online shopping. There is no doubt that the Indian ecommerce market is growing and everyone wants a piece of it.

How can sellers benefit from marketplace investors

Investors believe that they have only scratched the surface of the Indian ecommerce market and there is a lot of potential growth in store for the Indian ecommerce market. With rising dependence on mobile smartphones, hence more internet penetration, buyers are turning to their mobile devices for online shopping as purchases can be made instantly without waiting to log on to a computer or go to a physical store.

Investors pump money into the top marketplaces which enables them to perform better and offer satisfactory services and deals to sellers they tie up with. As marketplaces grow, their customer base and reach grows which will benefit the sellers selling through them.