Tradus has recently overhauled their website, viewable in ‘beta’ for around a month, combining a location based marketplace (the closer you buy, the quicker it gets delivered, and the cheaper the shipping), with a redesign of their website.

We’re actually pretty impressed at IOS regarding the redesigned Tradus website; it does differentiate it from the multitude of other marketplaces popping up in India, which all seem to have taken design lessons from the same school of thought. Out with the old… 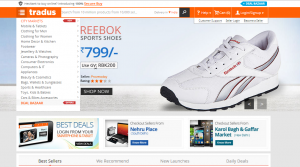 In with the new…

When any customer visits the site, they are greeted with a full screen overlay asking them to shop based upon location, which takes some hunting around to close.

The second obvious thing is the focus on full screen, high quality images and the highlighting of sellers before the fold (even those who have 3 out of 5 stars feedback), where previously, consumers had to scroll to see the top sellers.

Try and find out how to get in that spot, as it doesn’t seem to be related to feedback rating.

Why the location thing?

But what’s with the location angle? Could the Ibibo group (the owners of Tradus) be looking to move in to same day delivery, in much the same way that Amazon and Google have been doing in the US? Or could they be looking to enable delivery companies locally to do the same? It could of course, just be considered a differentiator in a fairly crowded market. 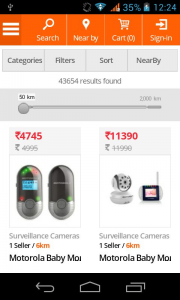 Importantly, the new Tradus is mobile friendly, so if you’re already selling on Tradus, expect to get a lot more mobile searches in the near future. In the current market, and apart from eBay, mobile friendly could be considered a much bigger differentiator than location.

Think of the Merchant!

Unfortunately, the same attention to detail has not been lavished upon the seller panel, which looks, quite frankly, forgotten.

Fortunately, with a bit of rummaging around, it’s possible to find the old panel residing at http://www.tradus.com/seller-panel, which (although it wasn’t great either) did give some level of functionality.

In summary, if you’re not already selling on Tradus, you probably should be (if you can manage to use it).

In The News Author Editor Date September 19, 2013
Share On